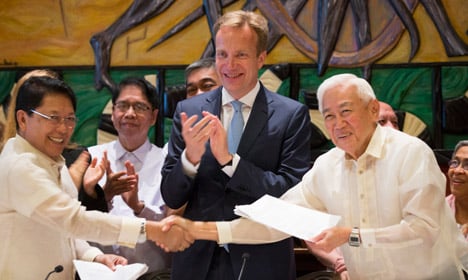 FM Børge Brende applauds as Philippine government representative Jesus Dureza and Communist representative Luis Jalandoni announce the ceasefire. Photo: Berit Roald/NTB Scanpix
The Philippine government and Communist guerrillas on Friday signed an indefinite ceasefire deal to facilitate peace talks aimed at ending one of Asia's longest-running insurgencies.
“This is a historic and unprecedented event … (but) there is still a lot of work to be done ahead,” President Rodrigo Duterte's peace adviser, Jesus Dureza, said at a signing ceremony in Norway, which is mediating the talks.
Both sides agreed to implement unilateral ceasefires which are unlimited in time, something that has never been achieved before in the peace process.
Norwegian Foreign Minister Børge Brende described the agreement as a “major breakthrough.”
The two parties have been meeting in Oslo since Monday, wrapping up with the signing ceremony on Friday.
As a prelude to the talks, each side had agreed to a ceasefire, but the truce commitment by the Communist side was due to end on Saturday.
The two parties also agreed during their negotiations to “speed up the peace process, and aim to reach the first substantial agreement on economic and social reforms within six months,” a statement from the Norwegian foreign ministry said.
“They plan to follow this up with an agreement on political and constitutional reforms, before a final agreement on ending the armed conflict can be signed.”
The two delegations agreed to meet again in Oslo October 8-12.
The Communist Party of the Philippines launched a rebellion in 1968 that has so far claimed the lives of 30,000 people, according to official estimates.
Its armed faction, the New People's Army (NPA), is now believed to have fewer than 4,000 gunmen, down from a peak of 26,000 in the 1980s, when a bloodless revolt ended the 20-year dictatorship of late president Ferdinand Marcos.