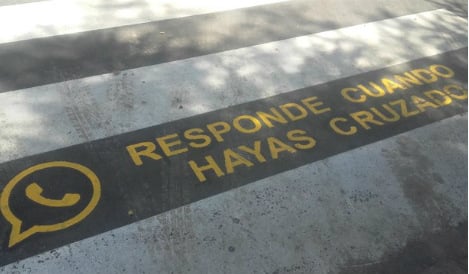 The warnings now appear at crossings in Talavera de la Reina in Spain.

A town in central Spain has incorporated new symbols at its zebra crossings to try to cut down on pedestrians stepping out in front of traffic.

This month Talavera de la Reina, a city with a population of over 80,000 in the region of Castilla-La Mancha, has introduced new markings at its zebra crossings telling pedestrians to cease messaging until they have reached the other side.

The words “Respond when you have crossed” appears on the tarmac of crossings alongside the whatsapp symbol, the most popular messaging service in Spain.

An estimated 10,000 accidents involving pedestrians while they are using their phones occur each year in Spain.

A recent study showed that texting while crossing the road made people four times more likely to ignore oncoming traffic and disobey the lights.