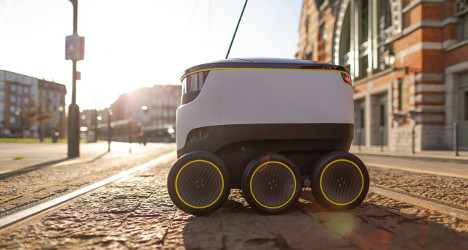 The robots are designed to carry out local deliveries autonomously. Photo: Starship

The Swiss national postal service, which has already trialled drones and self-driving postbuses in its quest for new technology, on Tuesday announced a new partnership with UK-based start-up Starship Technologies, set up by Skype co-founders Ahti Heinla and Janus Friis.

Starship’s fleet of autonomous robots are designed to carry out local deliveries within a 5km radius and have already been seen on streets in the UK and Germany since trials began last November.

From this September the robots will be trialled with dummy parcels in three Swiss locations – the capital, Bern, and the towns of Biberist in the canton of Soloturn and Köniz in the canton of Bern.

The aim is to assess the functionality of the post-bots with a view to adopting the technology for real next year, should all go to plan.

Speaking to The Local, Swiss Post’s Head of Development and Innovation, Claudia Pletscher, said it was vital for the company to stay on top of new trends when it comes to technology.

“We are number one in logistics in Switzerland so this trend needs to be and is very interesting for us. It’s very important that we are at the top of such developments, that they are tested and we see what impact it has on the delivery chain, on the delivery itself and on our clients.”


The robots have already been trialled in London. Photo: Starship

Pletscher said Swiss Post envisioned the technology being used in three specific areas – for food, for medicines, and for “hyperlocal” deliveries, meaning those within a very specific radius on a same-day or even same-hour timescale.

A pharmacy could use robots to deliver medicines to patients who live in the local area, for example; or a shopper could request a particular product delivered by robot within the hour.

Weighing around 30kg when loaded, each delivery robot can drive itself 99 percent autonomously but is monitored by humans remotely, who can take control at any time.

The robots are equipped with cameras and their location tracked, making them difficult to steal, said Pletscher.

During the test phase, the robot will be accompanied on its delivery by a handler, who can assess the robot’s performance and functionality, and the reactions of passers-by.

Pletscher stressed that, if adopted into its delivery portfolio, the robots aren’t going to put postmen and women out of a job.

“We will keep needing the postmen, it’s not a substitute, but it’s a complementary way of delivering things that today we do not have in our offering,” she said.

That’s because robots are unlikely to be used on a broad scale, she said. “It’s for a hyperlocal area where it makes sense, where delivery needs to be fast, flexible and cheap, but in a close radius. It doesn’t make sense on a broader [scale], it’s less economic and it doesn’t make sense process-wise.

“We deliver 18 million deliveries a day, it’s a lot – letters and parcels. We could never do that with robots. So you have to make sure where to place a robot and what delivery it’s used for, and then it makes sense.”

Following the trials, Starship hopes to roll out the technology for real deliveries in 2017, the company’s marketing manager Henry Harris-Burland told The Local.