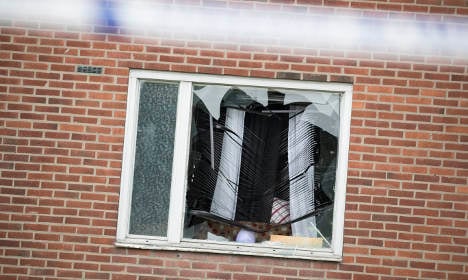 The window of the Biskopsgården apartment broken by a grenade. Photo: Björn Larsson Rosvall/TT

The child was killed when someone threw a hand grenade through the window of an apartment in the Biskopsgården suburb of the city at around 3am on Monday morning. The boy was visiting the apartment with his family.

Swedish paper Aftonbladet has since reported that the boy was Yuusuf Warsame, a resident of Birmingham, UK, with members of his family speaking to local British media. His parents are said to be Dutch citizens.

Swedish police would not confirm his identity however.

“We have said that he comes from a different European country, which is the only thing we can come out with today,” police spokesperson Peter Adlersson told news agency TT.

There were at least five children and several adults in the apartment at the time of the blast, with several receiving minor injuries. Police are working on the theory that the grenade attack could be linked to the shooting at a restaurant in another part of Biskopsgården in 2015, when two men were killed and eight injured in a gang-related conflict.

One of the men convicted over the fatal shooting was registered at the same address as the grenade blast. Police were not aware of any threat against the building, and are appealing for the public to help provide testimonies about Monday’s events.

Residents of the local area have reacted with shock to the death.

“I have lived here for 30 years now. Now, I don’t know. Should I move from here, or should we give support to young people so this improves? With today’s generation it feels like they don’t want to listen and have their own thoughts,” he added.

“I’m afraid it’s getting worse and worse. I think the gang conflicts are escalating,” said Jörgen Fredriksson, who has lived in the area for more than 40 years.

Police had yet to arrest any suspects for the attack by Tuesday morning.