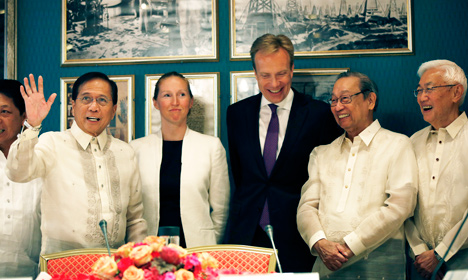 (L-R) Jose Maria Sison (NDFP), Elisabeth Slåttum, FM Børge Brende, Jesus Dureza (GPH) and Luis Jalandori begin peace talks. Photo: Berit Roald/NTB Scanpix
“On the part of the (government) panel, we have imposed a timeline of nine to 12 months,” Silvestre Bello, the government delegation's head of negotiations, told reporters.
The government and the rebels hope to breathe new life into the peace process by discussing simultaneously — contrary to previous attempts — the outstanding issues of social and economic reforms, political and constitutional reforms, and an end to hostilities.
See also: Five things to know about the Philippine peace talks in Oslo
“With this new approach we are quite confident that we will be able to achieve our timetable,” Bello said.
The head of the rebels' delegation, Luis Jalandoni, confirmed the timetable but was more cautious in his optimism about reaching a political settlement after 30 years of failed talks.
“I think we will try to do it in one year but it might take a little more time because the negotiations on social and economic reforms could take more time,” he told AFP.
“It's more complicated than some may think,” he said.
Established in December 1968, Communist Party of the Philippines launched a rebellion three months later that has so far claimed the lives of 30,000 people, according to official estimates.
The New People's Army (NPA), its armed faction, now counts just 4,000 members, down from 26,000 in the 1980s, though it enjoys the support of the poorest people in rural areas.
The closed-door talks in Oslo wrap up on Friday.