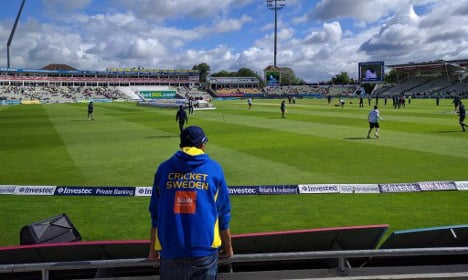 Cricket may be poised to grow beyond immigrant communities. Photo: Svenska cricketförbundet

Think of sport in Sweden and you probably think of Zlatan Ibrahimovic's football prowess, the nation’s ice hockey success, and much more before you finally might get to the very British sport of cricket. Yet Sweden has in fact just finished hosting the World Cricket League’s Europe Division 2 tournament in Stockholm, at a time when the sport is reaching ever greater heights in the Nordic nation.

As well as of course being good exercise for all involved, a key side-effect of the rise of the sport in Sweden has been helping to integrate new arrivals from Asian countries formerly part of the British Empire and their neighbouring countries, including Pakistanis, Bangladeshis and Afghans, for many of whom cricket can be considered the national sport.

In the past year or two, it has been even more significant in doing the same for new refugees in Sweden, arriving during the European refugee crisis which saw more than 160,000 seek refuge in the Nordic country in 2015.

Speaking before Sweden’s match against Israel one morning at the cricket grounds in Skarpnäck, Stockholm, the national team’s captain, Azam Khalil tells The Local: “This year alone we have had around 30 or 40 refugees who are teenagers, and they’ve been contacting us saying ‘we want to play cricket, how should we do it, or what shall we do, where can we go and play?’… and then we provide them with the facilities, the timings, we provide it all for them two days a week. We are working with Project Playground, a Stockholm-based charitable organization, throughout the summer.”

“We have refugees who are part of our teams and clubs in Division 3. We have very talented players from Afghanistan, Pakistan, and Bangladesh. I’m also responsible for Youth Development for the Stockholm region and the Under-19s, and they were participating in this Youth League.”

Commenting on the challenges that can arise for the refugee players and their teams, Khalil goes on to say: “We had two players who were picked for the Under-19s and Under-17s but because of their immigration statuses, they couldn’t go over to any neighbouring countries, so we had to cancel matches in Denmark.”

But that does not discourage Khalil and the other leading cricket players from helping the refugees’ integration into Swedish society: “Many of them are from Afghanistan and I am too, so it’s really easy for them to try to talk Swedish with me. I force them to talk to me in Swedish so they can learn, and I’m very open with them and I tell them what to say to help them travel around Stockholm, for example.”

Impressed by their efforts and skills in Swedish and cricket alike, Khalil tells The Local enthusiastically: “They are the future, they are the real future of Swedish cricket.”

The Swedish Cricket Federation was officially admitted into Sweden’s National Sports Confederation last year, recognizing cricket as a sport in Sweden. When The Local asks how he feels about the achievement, the chairman of the national federation’s board, Shahzeb Choudry, jokes: “Well, it has taken 25 years!”

With this new status, Choudry explains that Swedish cricket now has access to greater levels of funding than ever before, with an investment of 1.2 million kronor ($142,860) this past year, adding that the federation also “gets to participate in a lot of conferences and learn about how to organize sport and improve the cricket federation itself”.

With 54 cricket clubs now active across the country, and many growing rapidly in membership, both the national captain and federation chairman praise how much the national sporting confederation and local authorities are now embracing the sport, with Khalil stating: “I would just like to thank the Swedish government, the Swedish people, and the Sports Confederation, who helped us to make it to this point, as well as the city of Stockholm, which made it possible for us to have this tournament here, organizing this really big event here in Sweden.”

Discussing his own experiences moving to Sweden and becoming a citizen of the country, Choudry, who is a scientist working at the Karolinska Institute and has lived in the country for over six years, says: “On the Swedish National Day this year I went to Stockholm Stadshuset [city hall] for the ceremony. It was one of the proudest moments of my life.”

Given that the annual Nobel Awards banquet, a high-profile event in the Swedish calendar, is held in that very location each December, Choudry emphasized how momentous getting to go there was for him.

“And we had the opening ceremony [of the cricket tournament] there as well. I’d never been to city hall before and now this year I’ve been there twice!”

As well as playing their part in integrating refugees, the teammates also go into local schools, explains Khalil, “to teach cricket to the kids, and do presentations. Most of our young guys are used for going to schools and giving a lesson in cricket, so [the sport] is growing because of that as well”.

Many classes invite them back to give further lessons, and with this in mind, Khalil concludes with optimism: “If we keep working hard like this, we will soon have a lot of native Swedes who will be a part of Swedish cricket, not only of the Federation but the national team as well. We do have a very good chance that we can move forward and see Swedish cricket on the world map.”

With the national team having come second in the tournament, bested only by Germany and thereby qualifying for promotion into European Division 1, it's a very exciting time for the team and the sport as a whole in Sweden. As new talent and unprecedented levels of interest come in, it does indeed seem the country is set for more attention and success on the international cricketing stage.