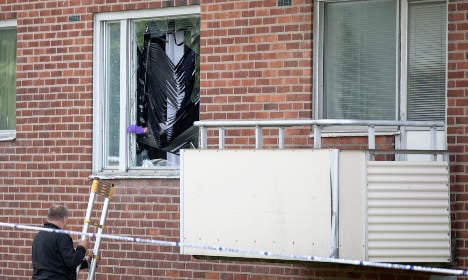 Emergency services were called to the building at around 3am when a large explosion was heard from its third floor. At least five children and several adults were inside at the time, said police, and an eight-year-old child who had suffered serious injuries later died in hospital.

“It could have ended much worse,” said police spokesperson Thomas Fuxborg.

The incident has been given a preliminary classification of murder/manslaughter by authorities, who also said that individuals convicted of serious violent crimes were living in the residence.

Police have confirmed that one of the men convicted over a fatal shooting at a restaurant in the area last year was registered at the address. They are investigating revenge as a potential motive.

“We'll have to see if the motive is linked to that. Our theory is that it may be,” said Fuxborg.

He confirmed that a forensic investigation had shown that the explosion was caused by a hand grenade.

“Someone was standing outside the apartment and threw a hand grenade through the window, into the living room. The boy was not part of the family registered at the address.”

“This is abhorrent. From the outside it is impossible to know who is in the apartment. That it affects an eight-year-old completely innocent boy is despicable,” he added.

No arrests had been made by 6pm.

Amir Rostami, a leading authority on Sweden's organized crime groups, who is based at Stockholm University, told The Local after the restaurant shooting last year that organized crime remained a persistent problem in Sweden's second-biggest city.

“Today, the gang environment is… I don't want to exactly call it the Wild West, but something in that direction,” he said.

“Some years ago, it used to be very strong groups controlling the criminal world, but today we've got more and a lot smaller groups fighting for control of their areas – and that has increased the number of conflicts we see between groups and individuals.”