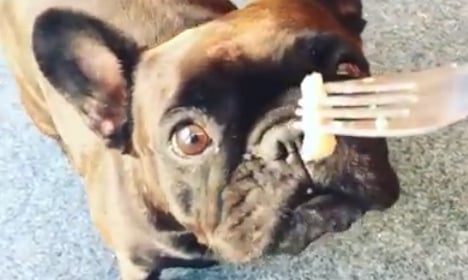 Does it smell so bad that even dogs won't eat it? The video below has been hailed by some as all the evidence you need to stop your Swedish friends nagging you about trying that infamous fermented herring.

But is it really that bad?

Malin Jonsson from Umeå in northern Sweden filmed her French bulldog, six-year-old Ella, begging for food at the table during a surströmming party.

“Eating surströmming is an important tradition in my northern family this time of the year. I have an older bulldog, Ernst, who is an avid surströmming lover and shares the delicacies with us every year. When Ella had been begging loudly at the table for a while she got the chance to taste it. We know how strong the craving can be,” she told The Local after the Västerbottens-kuriren newspaper first shared the clip.

But after only sniffing a piece of the fermented fish offered to her, the pet seemed to speak for many other people when she reacted as seen in the video below. Warning: the video is not for the weak of stomach.

“I was very surprised. I had expected that she would enjoy it, obviously. She's a northern dog. We've been speculating that maybe it's to do with the fact that her dad is from the Netherlands?! Or if it's her French genes,” Jonsson told The Local.

But the northern Swede said she would not give up on her dog.

“We know that for some people it takes a long time to learn to eat the rotten fish and you have to have some patience and start with a large amount of sides to alleviate the taste. This weekend we're having a crayfish party instead. It may be that she is unfortunately part of the group who prefer that, we have seen previous signs of that, but are not yet ready to give up,” she said.

“We're going to try other brands and make sure it's this year's herring. She got to taste the can of last year's herring, which has a stronger flavour. We'll also make sure we do it on a floor that's easier to clean. Fermented herring juice on a carpet is a nightmare to clean, even for a surströmming lover.”

The video has quickly gone viral in Sweden, nearing a million views by noon on Friday.

“It is peculiar. To think that so many people want to see a dog throw up, again and again (…) Unfortunately I've understood that a lot of surströmming opposers are using the video to get their point across,” said Jonsson.

“I think that many are able to recognize the struggle of learning to eat surströmming, or what it's like to have a major craving for something that isn't really that good for you. But I'm happy that people are enjoying the video. We need to laugh. I get to laugh every day at my crazy dogs.”

Still cherished and reviled by Swedes in equal measure, surströmming is a centuries-old tradition that stems from a time when workers were paid for their labour in herring. The fermentation process allowed them to store their fish longer.

Nowadays, the fish is caught in early summer, then packed away to ferment for months. The first cans are traditionally opened to much pomp and circumstance on the third Thursday in August.

If you want to try it, The Local spoke to a Swedish expert who works for the Surströmming Academy last year, who told us to serve it with onion, crème fraîche, bread and potatoes. Here's a video guide of Swedish people eating it, in contrast to Americans.