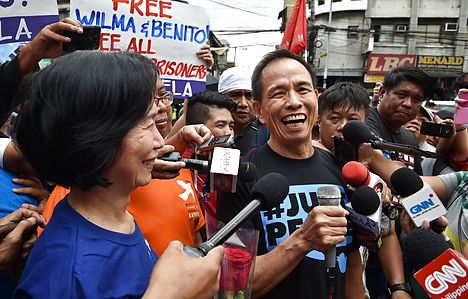 Communist rebel leader Benito Tiamzon (R) his wife Wilma greet supporters outside the gates of the Manilla police headquarters, shortly after their release on Friday. Photo: TED ALJIBE/Scanpix
Benito Tiamzon and his wife Wilma raised clenched fists, hugged friends and supporters and said they had high hopes of lasting peace after they posted bail and walked out of police cells in Manila.
Security officials claim the couple, who were arrested more than two years ago, ran the Communist Party of the Philippines and its armed wing, the New People's Army, whose 47-year campaign against the state has claimed some 30,000 lives.
“Our release is a goodwill measure that will create an atmosphere conducive for peace talks,” Tiamzon said.
He thanked President Rodrigo Duterte for allowing 17 rebels to be provisionally freed this week.
They aim to fly to Oslo for the August 22-26 negotiations and advise the rebels' political organisation, the National Democratic Front.
Norway has acted as an intermediary in the talks.
Peace talks stalled in 2013 under Duterte's predecessor Benigno Aquino after he rejected the communists' demand to free all imprisoned guerrillas.
The 65-year-old rebel chief said that Duterte's landslide election victory in May had brought about the rebels' best chance for a political settlement.
The rebel army is believed to have fewer than 4,000 gunmen left, down from a peak of 26,000 in the 1980s, when a bloodless “People Power” revolt ended the 20-year dictatorship of the late president Ferdinand Marcos.
Many top communist party cadres are in their 60s or 70s, some living in exile in Europe.
Confidence in Duterte
But the movement retains support among the poor in rural areas, and its forces regularly kill police or troops while extorting money from local businesses.
“We're confident the peace talks would move forward because we believe this is the first president who really desires meaningful reforms and has enough determination to see them through,” Tiamzon said.
Duterte has enjoyed relatively good ties with guerrillas operating around Davao, the southern city which he led as mayor for more than 20 years.
A self-described socialist, the 71-year-old has since appointed two left-leaning personalities to his cabinet and even initially vowed to form a coalition government with the rebels should the peace talks succeed.
Duterte declared a unilateral ceasefire last month, telling soldiers and police to stop operations against leftist guerrillas.
But he withdrew the ceasefire just five days later when a rebel ambush killed a government militia member and wounded four others.