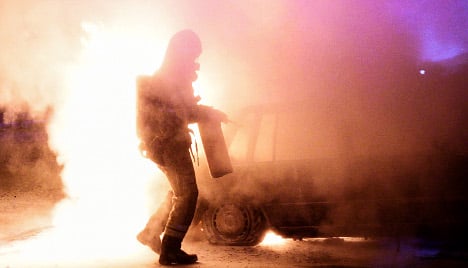 A firefighter battles a blaze on Arkitektgatan in Malmö on Monday night. Photo: Johan Nilsson/TT

In Husby, a suburb in northern Stockholm, emergency services were called at 2am to a parking garage.

“There was a lot of smoke. Two cars were totally burned out. There were 47 cars in total in that part of the garage and most of them have sustained smoke damage,” said Sven-Erik Olsson at Stockholm Police.

Police found a bottle of flammable liquid at the scene in Husby, an area that was at the centre of extensive unrest three years ago.

Earlier, at midnight, rescue service were also called out to Jordbro, a south-eastern suburb of Stockholm.

“Seven vehicles were on fire in the centre there,” said Olsson.

In Malmö, which has seen a rash of car burnings in recent days, police received reports of cars on fire in nine different places in the space of half an hour.

“We’ve received a lot of alerts about cars burning outdoors. Most of them are at addresses in Hyllie. We and the emergency services are getting there as quickly as we can,” said police press spokeswoman Anna Göransson.

But residents were forced in some cases to put the fires out themselves as rescue workers struggled to keep up.

“Residents have acted heroically They have put the fires out themselves with hand-held extinguishers. They are the only ones affected by this. It’s their cars that are burning,” said Göransson.

In Södertälje, 40km south of Stockholm, a biogas car was set alight in the Fornhöjden district.

In Borås in western Sweden, rescue services put out fires that had engulfed a motorbike and two mopeds.

Police made no arrests in any of the overnight cases.

On Monday police in Malmö arrested a 21-year-old man whose car contained cans of petrol and a hammer used to smash car glass, newspaper Sydsvenskan reported.

Former justice minister Beatrice Ask has called on the government to act.

“There has been an exceptional increase in the number of car fires over the years. A proper effort is needed now: more muscle for the police, more police officers, and the government needs to gather the authorities and insurance firms affected,” she told news agency TT.

The fires cost a lot of money for residents in the areas hardest hit, she added.

“Losing a car can mean that you’re not able to do your job.”

Roger Haddad from the Liberals said a greater police presence was needed in the affected areas.

Haddad also called for a law change making it easier to move abandoned cars, which he said were often the ones torched.

“It’s also the case that burned out cars are left there for weeks. That’s unacceptable and increases insecurity,” he said, adding that he was in favour of more surveillance cameras to help prevent car fires.