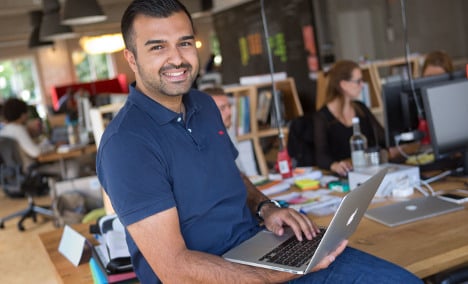 Entrepreneur Eyüp Aramaz, who has Turkish heritage, is head of the advertising startup Webkarma.

Employers with an immigration background created 1.3 million jobs in 2014, according to a new study by the Bertelsmann Foundation on Thursday.

This was a big increase from a decade ago when immigrants introduced 947,000 new positions in 2005.

The number of non-German entrepreneurs has also risen within this time period by a quarter to 709,000 people – which is huge considering that during that time, the overall population of immigrants in Germany rose by less than 9 percent.

The number of jobs created varied by region across the country: immigrants in Bavaria, Baden-Württemberg, Hesse and Berlin were providing many more work opportunities than in Lower Saxony, Hamburg or Rhineland Palatinate.

And the types of industries where immigrants are employing the most people are changing.

“When people think about the immigrant economy in Germany, they often think first about the kiosk at the corner, or the Chinese restaurant where the whole family works. The data shows that we can dismiss these cliches more and more,” said study leader Armando Garcia Schmidt.

The number of self-employed people with foreign roots working in trade or hospitality declined by ten percent between 2005 and 2014 to 28 percent. That means that more immigrants are going into other industries.

But there is an income gap that people from immigrant families still face: immigrants and their descendants in Germany earn on average 30 percent less than people without immigrant roots.

Experts believe that the reason could be the level of education that immigrant business owners generally have, and people whose families and companies have been on the German market longer have an advantage.

“Especially when it comes to advancing in more profitable sectors, immigrants are just getting started,” Garcia Schmidt said.