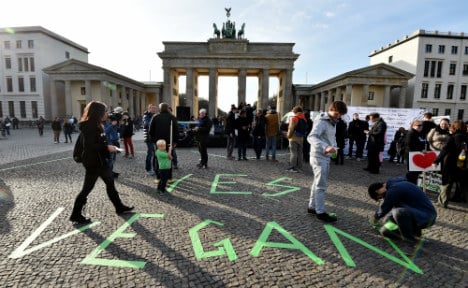 When I first moved to Germany I was a different person. Straight out of college, I had a lot to learn about life and myself. Living in Berlin was eye-opening in many ways.

Food was always a big aspect of my life, but not always the best. Since a young age, I had a complicated relationship with food. Going from eating too much to eating nothing at all, I was always out of balance.

This changed once I moved to Berlin. Instead of looking to food as the enemy, I discovered how it can help you heal.

Cooking and discovering healthy recipes became my new passion. I’d rush to the supermarket after work to prepare dinner. Kürbis (pumpkin), Brot (bread), and Mandel (almond) were actually the first German words that I learned. At that time, I was about 90 percent vegetarian, but something was still missing.

That’s when I went to the Veganes Sommerfest, a festival which takes over Alexanderplatz in Berlin every year in August. It's the perfect event for you to get a feeling for the movement – there’s a bit of everything there.

From the different vendors showing off their products, to the various animal rights organizations, the festival, which runs from August 19th to 21st this year, has it all.

Known personalities will be there for a variety of workshops and debates for vegans and non-vegans alike. And, of course, it is a showcase of some of the most amazing vegan food we have from all over Germany.

I still remember how welcomed and connected I felt my first time there. It was one of these aha! moments when it all finally makes sense to you.

I went vegan almost overnight – after watching a documentary promoted at the festival, I felt as if I had no other option. If I wanted to be true to my values, I had to be vegan. For me, it’s an ethical choice first and foremost.

After I had the information, I simply could not stand the fact that I was complicit in the killing of dozens of animals for pure pleasure. In a world with an abundance of food and nutritional sources, this was an easy decision to make. As vegans we believe animals owe nothing to humans, neither food, clothing, nor entertainment. To us, it’s just not right.

This month marks my third year as a vegan and almost my fourth living in Germany. And today I’m a different person because of these choices.

Berlin is considered the vegan capital of Europe for a reason. Its vast variety of vegan restaurants and cafés perfectly marries the many Berliners bringing the movement to a whole different level of vegan living.

We have cooperatives such as La Stella Nera in Neukölln, which will make you forget you're not in Italy – or that you ever thought vegan cheese couldn’t replace the real thing.

Kontor Eismanufaktur, which has shops in Mitte and Prenzlauer Berg, has the best ice cream I’ve ever tried, and even has spaghetti ice cream.

Once you start looking, you’ll see it everywhere, from Meetups to animal rights conferences. They care about animal welfare and about the planet.

And so I fell in love with the city and myself again. Today I not only feel better than ever, but I’m also writing my own cookbook. And honestly, I couldn’t have done it without this incredible city.

Inês David is a food writer from Portugal who lives in Berlin. You can follow her journey through Berlin's vegan scene on Instagram.

The French baguette – one of the country’s most abiding images – was given world heritage status by UNESCO on Wednesday, the organisation announced.

Here are some of the more popular theories:

Napoleon’s Bread of War
The oldest tale has the baguette being kneaded by bakers in Napoleon’s army. Less bulky than a traditional loaf, the long slim shape of the baguette made it faster to bake in brick ovens hastily erected on the battlefield.

France’s most famous man of war was preoccupied with getting his men their daily bread.

During his Russian campaign in 1812, he toured the ovens daily to sample the day’s offering and ensure the crusty batons were being distributed regularly, according to historian Philippe de Segur.

He also had portable bread mills sent to occupied Moscow, but the setbacks suffered by the Grande Armee in one of the deadliest military campaigns in history ended his bid to export the doughy staple.

Viennese connection
Another theory has the baguette starting out in a Viennese bakery in central Paris in the late 1830s.

Artillery officer and entrepreneur August Zang brought Austria’s culinary savoir-faire to Paris in the form of the oval-shaped bread that were standard in his country at the time.

According to the Compagnonnage des boulangers et des patissiers, the French bakers’ network, Zang decided to make the loaves longer to make them easier for the city’s breadwomen to pluck from the big carts they pushed through the city’s streets.

Breaking bread
Another theory has the baguette being born at the same time as the metro for the 1900 Paris Exposition.

People from across France came to work on the underground and fights would often break out on site between labourers armed with knives, which they used to slice big round loaves of bread for lunch.

According to the herodote.net history site, to avoid bloodshed, one engineer had the idea of ordering longer loaves that could be broken by hand.

Early rising
In 1919, a new law aimed to improve the lives of bakers by banning them from working from 10 pm to 4 am.

The reform gave them less time to prepare the traditional sourdough loaf for the morning, marked the widespread transition to what was called at the
time the yeast-based “flute”, which rose faster and was out of the oven in under half an hour.

Standardised at 80 centimeters (30 inches) and 250 grams (eight ounces) with a fixed price until 1986, the baguette was initially the mainstay of wealthy metropolitans, but after World War II became the emblem of all French people.