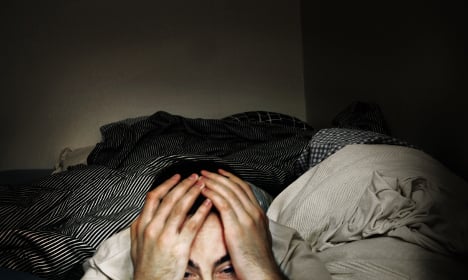 All I want is to check my social media. Photo: Nina Varumo/SvD/TT

Neuroscientists at Uppsala University compared the effects of bedtime reading using a tablet versus an actual book (it's that thing made out of paper) in a study published in scientific journal Sleep Medicine.

“Following daytime bright light exposure, evening use of a self-luminous tablet for two hours did not affect sleep in young healthy students,” said a press statement explaining the findings.

The use of devices emitting blue light, such as tablets and smartphones, has previously been shown to interfere with sleep. But it is not that simple, one of the researchers behind the study told The Local.

“Our most important finding was that the issue of whether screen light in the evening could interfere with your sleep is more complex than previously highlighted and that there are certain important factors (such as daytime exposure to light) that affect this,” said PhD student Frida Rångtell of the Department of Neuroscience.

“You could for example imagine that if you spend the day outside, perhaps it does not matter so much if you use a tablet to read before going to bed,” she added.

Surveying 14 young women and men, Rångtell and her colleague, associate professor Christian Benedict, examined what happened if the participants were first exposed to bright light for hours during the afternoon.

They were then asked to read from 9pm to 11pm, with one half of the group using a tablet and the other half a normal book. The following week they swapped. The Uppsala team found that the two groups' levels of melatonin, the hormone affecting your sleep-wake cycle, remained the same.

“Melatonin is sensitive to light, and bright light during the day helps suppress its production and release. That is to say, if you expose yourself to bright light during the day, your brain exhibits a strong drive to produce and release melatonin during evening hours. This facilitates falling and staying asleep, and is likely to attenuate the undesirable effects of blue light-emitting electronic devices on sleep.”

But do not take this as evidence that you should continue to reply to those work e-mails, spend time Facebook stalking your friends or thinking up a clever Twitter hashtag just before going to bed.

“I would add that we have studied the light from the screen, and it is very likely that how you use technology in the evening and those emotions it may arouse, plus the difficulty of switching off, may be more important factors than the light in regards to interfering with sleep,” said Rångtell.

The tech-savvy Swedes are famously some of the world's most active smartphone users, for better or worse, and the findings quickly grabbed headlines in Sweden.

“Given that the use of smartphones and tablets has exploded in recent years and thus affect most people in society, it is not surprising that it has received a lot of media attention. Because this technology is a new phenomenon we also don't know much about how it could affect us,” said Rångtell.

“Just like previous studies in this field, ours was quite small, so larger studies should explore further factors that could have an impact on how we are affected by screen light in the evening, for example seasons, daytime light exposure, age and gender.”