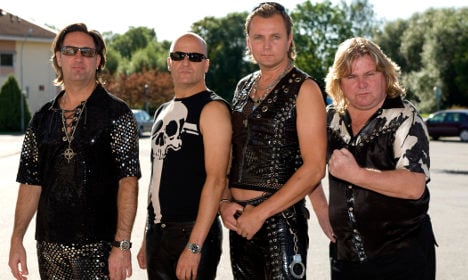 Black Ingvars, who pulled out of the Sommarfestivalen event. Photo: Anders Wiklund/TT

Black Ingvars were originally booked to play the SD-backed Sommarfestivalen festival in southern Swedish town Sölvesborg on August 26th. They later cancelled the appearance however, saying they were unaware it was being organized by the far-right party.

And after pulling out of the concert, a member of the group now claims he has received multiple anonymous threats in response.

“I have received e-mails where people write that they hope I die in a car crash or that I get cancer,” singer Magnus Tengby told Swedish tabloid Aftonbladet.

According to the musician, the threats have been so bad that the band now stays at secret locations while touring and has taken the measure of having bodyguards on stage while they perform.

The Sweden Democrats tell a different version of events however. They claim that the band is lying, and that the party had e-mail exchanges with them before the festival which made the details of the event clear.

“Tengby said explicitly that he didn’t have any problem with it, which they also wrote in a Facebook post,” SD’s head of press Henrik Vinge told Aftonbladet.

Singer Tengby has refuted that suggestion, insisting he was aware that Sweden Democrats leader Jimmie Åkesson would speak at the festival, but not that the party was behind the entire event.

The Local has contacted the Sweden Democrats and Black Ingvars for comment.