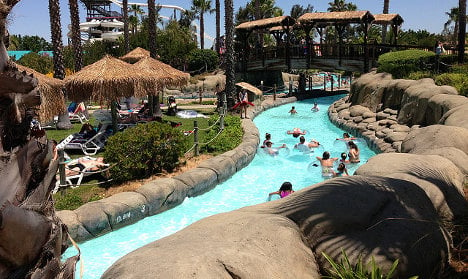 Fortunately, no one was injured in the incident at the Le Vele waterpark, one of Lombardy's largest attractions situated 30km out of Brescia.

The roof of the building collapsed suddenly at around 2:20pm on Monday, and ambulances, fire engines and a helicopter service soon arrived on the scene, according to local media reports.

The building housed a bar and had been undergoing renovation. It was called the 'Suite' and offered guest rooms, but was empty at the time.

The building is currently undergoing renovation and so the area was closed off to public, but authorities were initially concerned that some of the workers may have been inside at the time of the collapse.

Firefighters inspected the rubble to look for any injured people, Il Giornale di Brescia reported, however, the water park and local mayor both confirmed on Monday afternoon that no one had been hurt in the accident. Mayor Giacomo Morandi added that the building had passed all its structural tests, saying that the cause of the collapse would likely be determined in the fire department's report.

The park said on its Facebook page: “It seems pointless to apologize and reaffirm that certain events are not forseeable… we are working for you and will update you as soon as possible”, later confirming that the park would be open as usual from August 9th onwards.

Le Vele, which describes itself as a “water paradise”, includes 10 pools, water slides, roller coasters, sports and entertainment facilities, as well as accommodation and restaurants.