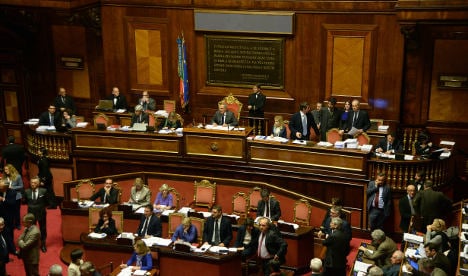 Antonio Stefano Caridi, 47, allegedly tied to the powerful 'Ndrangheta crime syndicate in southern Italy, told the house he was innocent of the mafia allegations against him – but to no avail.

Prosecutors had called for his arrest in July following an investigation codenamed “Holiest Mother”, which claimed Caridi was one of a group of so-called “invisibles” who linked the shadowy underworld to Italy's institutions.

He had “the power to engineer political and economic destinies”, they said, according to Italian media reports.

Caridi, who belongs to a largely centre-right parliamentary group called Great Autonomies and Freedom (GAL), left the chamber on the brink of tears and was accompanied to Rome's Rebibbia prison by his lawyer.

His defence claims Caridi's power was no more than clientelism, while his visit to the house of a mafia boss during the 2010 regional elections lasted too little time for any criminal deals to have been struck, according to L'Espresso weekly.

“We are happy… to have sent out a clear message to all those who think they can be saved from accusations of very serious crimes thanks purely to their parliamentary immunity,” senator Mario Giarrusso from the Five Star party said after the vote.

The 'Ndrangheta has surpassed Sicily's Cosa Nostra and the Naples-based Camorra thanks to the wealth it has amassed as the principal importer and wholesaler of cocaine produced in Latin America and smuggled into Europe via southern Italy.

A series of arrests in late 2014 and early 2015 confirmed that the organisation had expanded its Italian operations outside Calabria by buying up dozens of legitimate business across the wealthier north of the country, largely to launder cocaine profits.