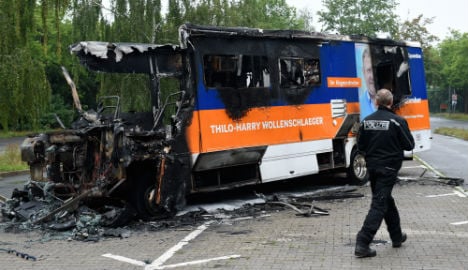 Police were called to the scene to investigate the severely burned campaign bus of Thilo-Harry Wollenschlaeger, who is running for local parliament election for the Spandau district of Berlin with Merkel's CDU (Christian Democratic Union) party.

The Berlin state election is set for September.

An unknown person reportedly lit the bus on fire while it was parked in the outskirts of Berlin on Thursday night, police told The Local.

A driver called police around midnight after he had spotted the bus set ablaze. The vehicle was ultimately burned out completely, while a crane and a semi-trailer parked next to it were also damaged.

The bus was part of the district campaign of Wollenschlaeger, who is running in the upcoming Berlin state parliament elections in September.

“We cannot yet confirm the motive of the attack but investigations are ongoing,” Berlin police spokeswoman Valeska Jakubowski said to The Local.

Director of the CDU Berlin office Dirk Reitze told The Local that the attacks could be “politically motivated”.

The party's campaign has in recent weeks been subject to multiple attacks, he said.

“In the centre of the city, we have seen that people tear down or besmear our posters. There have also been attacks on our offices in Friedrichshain-Kreuzberg and Treptow-Köpenick [southeast of the city]”, said Reitze.

Wollenschlaeger's campaign will continue, though the consequences of the attack could have been a lot worse, Reitze added.

“The vehicle is also in Wollenschlaeger's private use. He is a known showman in the city and sometimes he sleeps in it with his family. We don't even want to think about what would have happened, had they slept in there,” Reitze said.

Only about two months ago, CDU Spandau had posted pictures of the bus, stating: “We are on-site for you! Today you were able to approach us at our information stands in Spandau again. Our candidate Thilo-Harry Wollenschlaeger was out in Hakenfelde with his bus.”

On September 18th, elections will be held in the German capital for the Abgeordnetenhaus (Berlin parliament) and Bezirksverordnetenversammlungen (individual district parliaments).

Buses are not the only ways candidates have been campaigning; an SPD candidate took to dating app Tinder to spread the message of his campaign.