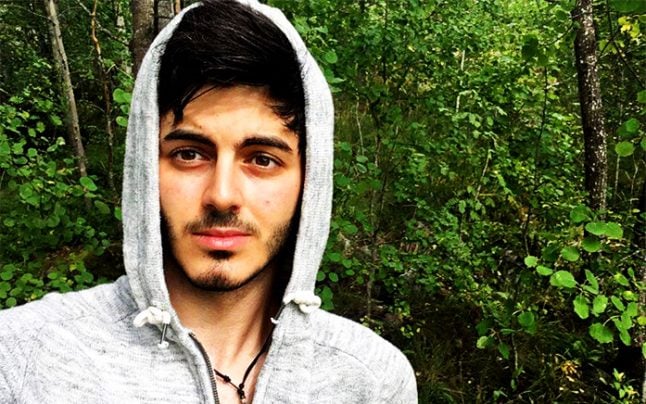 Studying medicine had been his goal for as long as he could remember, and Shamoun has had to overcome more obstacles than most to get there, from studying in Syria during its civil war, to mastering the Swedish language in just seven months.

“I asked my brother to read the letter for me. The moment he said I had been accepted, I was hysterically happy,” remembers the 20-year-old, who will begin his medicine degree at Linkoping University on August 15th this year.

Shamoun grew up in al-Qamishli, Syria, and his studies have always taken a high priority. His parents, a dentist and an ophthalmologist, encouraged Shamoun to focus on his studies despite the tough conditions – even as the war led to water shortages and blackouts as the electricity would go off for hours on a daily basis.

“The greatest difficulty for me was being unable to read for my high school final exams, because the lights went off for hours each day,” he says. “I couldn’t bear the thought of not getting the top grades in my exams – then I wouldn’t be able to study medicine.

“The only solution was to change my routine, so I began waking up at 5am so I could study during daylight, from dawn until sunset.”

Shamoun managed to complete the high school programme with exceptional grades, and kept studying right up until the family left Syria in 2014.

Once they arrived in Sweden that September, Shamoun and his brother were keen to get back to their books straight away, but were told it could take a year to receive their asylum decisions, and they would be unable to start school without a Swedish personal number.

But having worked so hard, Shamoun wasn’t going to give up on his dream.

He started researching the best way to learn Swedish independently, and came across the story of a Greek immigrant, Thoidor Kalifatides, who had moved to Sweden and mastered the language.

“He inspired me, and I wanted to follow in his footsteps,” says Shamoun. He went to the library and began reading Kalifatides’ books and a grammar manual, before moving on to Swedish classics by August Strindberg, including Röda Rummet and Fröken Julie.

“A sentence would take me a day to understand and remember; a page took me a week,” remembers Shamoun.

Then he faced another problem: “I discovered these books were written in the classic Swedish, not the language which is used today – when I spoke it, people didn’t understand me!”

Shamoun then adapted his learning, studying modern books, such as the Sherlock Holmes mysteries and the Da Vinci code, translated from English to Swedish. He had already read them in Syria, allowing him to grasp the language more easily and progress more quickly.

“My daily routine was reading, eating and sleeping, and after seven months the language became a part of me,” says Shamoun.

In September 2015, the bookworm received his residence permit; by this point, he was getting through one novel each day.

“I immediately ran to the Komvux [Swedish municipal adult education centre] to find out how I could get my Syrian grades converted and complete higher education in Sweden”, says Shamoun. “I was so determined to start university in 2016 and no later!”

After a three-month wait, he was given an appointment with a student counsellor at Komvux, who advised him on his university application. He studied for the courses independently before taking the assessment exams – and passing with flying colours.

His story has been reported in Swedish media, and Shamoun has been praised for being accepted onto one of the most competitive courses after just six months of studying. Now, he can look forward to achieving his dream of becoming a doctor.