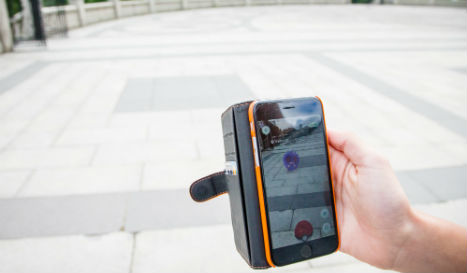 A Pokémon monster lurking in Oslo's Vigeland sculpture park. Photo: Audun Braastad/NTB
The man, who is in his 40s, was rushed to hospital in the early hours of Friday morning from a popular park in Sandefjord after the man he was arguing drew blood with a blow to the head after a heated exchange about the game.
The man who assaulted him was on Friday morning still being held by police in custody. Police would not confirm if either man had been intoxicated at the time of the quarrel.
“I do not understand why men in their 40s would arguing over a mobile phone game,”  Merete Kvaal from the local Vestfold Police told Verdens Gång newspaper.
The game, which combines GPS positioning with 3D graphics to allow police to hunt little virtual monsters arouhd the real world, has become such a sensation in Norway that VG has launched a dedicated Pokémon Go studio, featuring real-time coverage of all Pokémon-related news worldwide.
It has sent players exploring in little visited areas all over the world, leading to the discovery of corpses in Denmark and the US.
But the roaming has also led to a spate of injuries, with around two people daily coming to the emergency ward with Pokémon-related injuries in Oslo alone.
In Denmark on Thursday a 21-year-old Pokémon hunter was killed when he was run over by a delivery vehicle while the app was running on his phone.