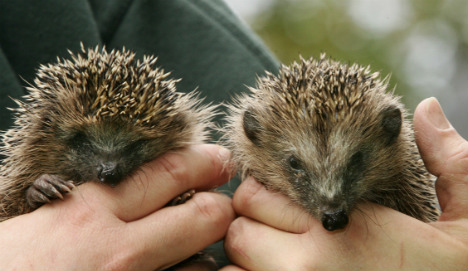 Police in the town of Büchenbach near Nuremberg received a very startling call-out on Wednesday night.

A man was so infuriated by the noise of “loud panting” coming from under the stairs at the entrance to his house that he called the cops at around 11pm, a police spokesperson said on Thursday.

Having searched the premises from top to bottom, the police finally discovered two very unusual suspects.

A pair of hedgehogs had been mating in the cosy little spot for about 20 minutes.

But, had they not been caught, the irate man would have been disturbed for a good while longer.

An expert from the veterinary department of Ludwig-Maximilian University of Munich explained that the act normally “lasts several hours”.

But why were the animals making such a racket?

“Hedgehogs groan loudly during the act […] and the male makes most of the noise”, the animal specialist added.

So that explains why the “suspicious sounds” were so excessively frustrating to the resident.

Luckily the aggravated man wasn’t disturbed for too long. The pair of hedgehogs fled immediately in the light of the policemen's torches.

But this isn’t the first time that the cops have been called by angry residents lodging noise complaints about their neighbours having a little too much fun at night.

In 2010, a couple from Zwickau in Saxony were evicted from their flat after neighbours reported on multiple occasions that they were being kept awake by very loud sex noises.