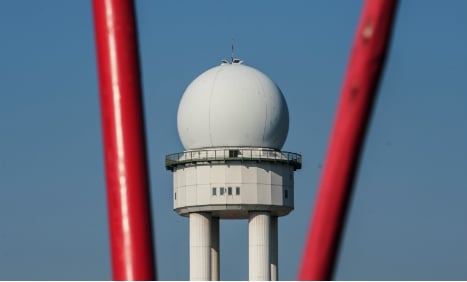 What's the point of this mysterious tower at Tempelhof Airport? Photo: DPA. Bielefeld is allegedly a city of 330,000 inhabitants in the western state of North-Rhine Westphalia. It even has its own website with event listings and the usual administrative information.

But many people have reason to doubt the city actually exists.

Questions first started being asked on the internet of all places back in 1994. A group of students at the University of Kiel realized that, while the city occasionally cropped up in conversation, they'd never actually met anyone from Bielefeld or seen it with their own eyes.

Further investigation showed they didn’t even know anyone who knew anyone who'd been there.

In recent years people have sought to disprove the theory. Some have claimed to have visited the elusive town. Others have been as bold as to suggest that they come from there. But the suspicion lingers that these people are little more than actors employed by intelligence agencies to cover up the disturbing truth.

Even the moderately successful football club Arminia Bielefeld is said to be in on it – their stadium is not actually situated inside the 'city', meaning fans can watch a match and go home without ever having been in 'Bielefeld'.

The city is a ubiquitous topic in German conspiracy culture. During a speech in Berlin, Chancellor Angela Merkel once mentioned an event she had been to there, before adding “I have the impression that I was there,” to raucous laughter.

West-German CDU politician Uwe Barschel was found dead in a Geneva hotel bathtub in 1987, a day before he was supposed to be interrogated in connection with one of the biggest scandals in modern German history.

Once seen as a potential future Chancellor, Barschel had been caught up in the Waterkantgate scandal that year, in which he was accused of secretly defaming his SPD rival in the run up to an election.

Coroners first ruled the death a suicide, as a cocktail of prescription drugs was found in his blood.

But the method of suicide was never fully determined. Barschel certainly couldn’t have drowned himself – his head was completely dry and above the water. And questions lingered over a mystery contact he wanted to meet in Geneva, who he believed would clear his name.

Some theorists believe he was lured to Geneva and killed by his own government to silence him once and for all, before the scandal brought the whole house of cards down.

Others claim that the death had nothing to do with domestic politics and that Barschel knew too much about an arms deal between Israel and Iran and was assassinated by an Israeli spy.

The Süddeutsche Zeitung describes the Barschel case as “our own little Kennedy assassination.”

We’re all familiar with the two nuclear bombs that Harry Truman dropped on Hiroshima and Nagasaki, but in Germany many believe that Adolf Hitler and the Third Reich were in the process of developing their own A-bomb during the Second World War.

ZDF, a major German broadcaster, even produced a documentary last year titled ‘The Search for Hitler’s Atomic Bomb’, which claimed that the Führer was close to achieving his goal of having a nuclear weapon.

The documentary also reported that he had created a “flying saucer” to transport the bomb. Could sightings of it during test flights be the reason there are theories of Hitler having contact with aliens or even having been one?

The ZDF report has subsequently been thoroughly debunked by other German media outlets, but that's not going to stop us from whipping out our Geiger counters during the lunch break.

In May a retired mechanical engineer claimed he had discovered some of the Nazis' nukes in Thuringia using 3-D imaging technology.

Despite his worries about the possible danger of decaying bombs, the authorities acted as if they were distinctly unconcerned… almost too unconcerned. Tempelhofer Feld is a former airport in the centre of Berlin that has been turned into the capital's largest park.

The terminal currently houses over a thousand refugees, but it used to be used by the US air force back in the Cold War days..

And some believe that those nasty spooks at the CIA still haven't put their old ways to bed.

It is believed by an enlightened pair of conspiracy theorists that the Americans put an extremely low wave (ELF)  emitter beneath the abandoned airport to attack the Berlin population through their minds. This, they say, is the reason for an allegedly high and mysterious illness-rate in the capital.

The two theorists wrote about this on their website, but the article has since been taken down.

Mr Snowden, if you know anything, we want answers!

5. Angela Merkel is a lizard person

So enough with the could bes and maybes. Time now for a conspiracy that deserves real journalistic consideration.

Many worldwide hold the quite reasonable belief that our planet is run by lizard people, or ‘Reptiloids’.

The theory is that these lizards can shapeshift and take the form of a human body, proceeding to rule major countries with their superior intelligence.

A lot of Germans believe this to be the case, as can be seen from the plethora of German YouTube videos detailing the history and rise of the lizards.

This groundbreaking video exposes German Chancellor Angela Merkel for being the machinating reptile she is, pointing out that her formerly blue eyes have turned green since she came to power – and that her pupils are now slits, like those of a lizard.

The creator of the video states that he has not edited the footage at all.

One YouTube commenter explained underneath why Merkel has no children of her own.

“She doesn’t have kids – she lays EGGS!”