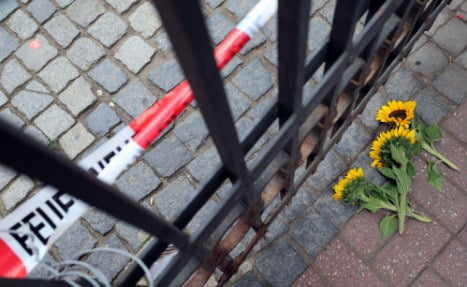 The 27-year-old, who pledged allegiance to the Islamic State (IS) group in a video found on his phone, entered Bulgaria illegally from Turkey in July 2013 and stayed until mid-2014, the interior ministry in Sofia announced Wednesday.

“Over this period he had not attracted police attention with any anti-social activities,” Bulgaria's Interior Ministry Chief of Staff Georgy Kostov said in a statement.

Germany had rejected the man's asylum claim and he was facing imminent deportation back to Bulgaria when he carried out the attack on Sunday in the southern city of Ansbach.

Police said the Syrian man intended to target the open-air festival attended by 2,500 people but was turned away as he did not have a ticket, and detonated his rucksack bomb outside a nearby cafe, injuring 15.

A guard at the festival later told DPA that the 27-year-old did not even try to enter the area after walking up and down near the entrance for a while.

Bulgaria's public BNT channel interviewed the man twice at a Sofia refugee shelter in September and November 2013, and broadcast the footage again on Wednesday.

It showed a gaunt, long-haired man in a red checked shirt who pulled up the leg of his jeans to show what he said were shrapnel scars on his legs.

He told BNT he had been a maths teacher in Aleppo but lost his family and paid a human trafficker to smuggle him from Turkey to Bulgaria in the hope of ultimately reaching Germany, Austria or a Scandinavian country.

In a second interview he complained that fraudsters had taken his money to find him a place to stay outside the shelter but tricked him and left him on the street, relying on other refugees for food.

BNT journalist Teodora Asenova, who interviewed the Syrian, described him as “rather quiet, reserved, even shy.”

“You could see in his eyes that he was a person who had nothing to lose but he was not aggressive,” Asenova told BNT on Wednesday.

She recalled him saying he “did not approve of violence and did not divide people by their faith or religion” but she also said he was “naive and could have been manipulated.”

After the attack the jihadist-linked Amaq news agency said the attacker “was a soldier of the Islamic State” who had acted “in response to calls to target nations in the coalition fighting” IS.

Bulgarian authorities said they saw no indication that he was radicalised.

Unlike refugee status, humanitarian protection does not give the right to travel freely without a visa and Parvanova did not say how the attacker was able to leave Bulgaria.