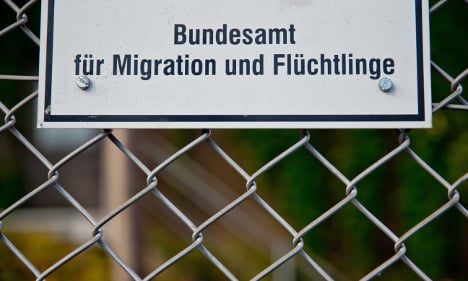 A sign at the Zirndorf migrant centre. Photo: DPA

Bavarian police confirmed that there had been a detonation around 100 meters from the refugee centre at around 2.30 pm. But they said it was not an explosion and that it had not caused any injuries. “There is no particular threat to the area,” police said.

The initial police report states that explosives experts are on their way to the scene but that they do not believe there was any explosive substance in the suitcase, saying it was more likely aerosol cans which had been packed inside.

Police are now searching for a man and a woman who they believe to be behind the scare.

Reuters had initially reported that the explosion happened outside a reception centre for refugees in Zirndorf, a western suburb of Nuremberg in northern Bavaria.

Bavarian broadcaster Bayerische Rundfunk (BR) later reported that no-one had been injured in the incident.

People who heard a loud bang at an allotment area arrived to find the burning suitcase at the scene. Police arrived shortly afterwards, BR reports.

Bavaria has been badly shaken by several violent attacks on public spaces in the last week and a half.

Last Monday a young refugee attacked train passengers with an axe in Würzburg. Another teenager went on a shooting rampage in Munich on Friday killing nine other people.

On Sunday a Syrian man blew himself up in Ansbach, a town around half an hour's drive southwest of Nuremberg.

Police close to where the suspect's body was found in the water. Photo: Adam Ihse/TT

Named as Mark Lorentzon by Swedish media, the man was suspected of being behind the pre-dawn blast last Tuesday that injured 16 people at the building where he lived.

City workers pulled a body out of a central Gothenburg waterway early Wednesday that “was identified as that of the man sought by police and prosecutors… after the explosion in a building,” prosecutors said in a statement.

They added that suicide was the most plausible cause of death. The man was the subject of an international arrest warrant issued earlier this week.

The suspect, who had been due to be evicted from the building on the day of the explosion, had vanished without a trace.

The blast, which sparked a major fire, landed 16 people in hospital including four with serious injuries, and residents of 140 apartments were evacuated.