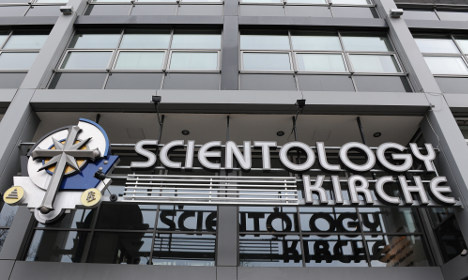 The Church of Scientology's German headquarters in Berlin. Photo: DPA

While the slogan may seem innocuous enough, it is believed to be a cover for the local branch of the Church of Scientology.

Unlike the US, Germany does not recognize Scientology as a religion; it has instead been regarded as an 'anti-constitutional sect' in Germany since 1997, and is observed by the Federal Office for the Protection of the Constitution, Germany's domestic security agency.

For this reason, the group – which has come under fire for controversial beliefs such as rejecting psychiatry and for harassment of critics – often operates under different names in Germany.

The Federal Office for the Protection of the Constitution warned Hamburg residents about the stands in a statement which described Scientology as an ‘anti-constitutional sect’, and said the ‘Say no to drugs’ group was ”one of the many camouflages” used by the controversial sect.

They said that the campaign was not affiliated to any professional drugs counselling services, and was merely a pretext to start conversations with unwitting Germans “and ultimately win over new members” to their belief system.

The agency added that use of an anti-drug slogan was a tactical decision, saying: “It is well known that the Scientology organization is observed by us, so it is unlikely that a single passerby would be interested if they openly used the ‘SO’ label.”

The stands are due to appear in the Bergedorf district of Hamburg this Saturday, but it is far from the first time that Scientologists have used anti-drugs marketing to draw in new followers. The agency warned that the group distribute their leaflets in shops, including in Hamburg, and rarely include any indication that Scientology is behind the campaign.

The website and leaflets only provide brief overviews of what the organization is, and encourage people to sign up for membership – which provides Scientology leaders with a means of direct contact to spread their message.

In 2011, the 'Say no to drugs' organization was found to be targeting German youth through blogs and videos on social networking sites.

One Church of Scientology member was last week denied security clearance for access to classified materials at his place of work, a decision which a Berlin court upheld.

Even Tom Cruise ran into trouble when filming Valkyrie in Germany in 2009, with film-makers initially denied access to a Berlin building complex due to Cruise's Scientology membership.

Courts have ruled in the past that the group is engaged in activities that are subversive to freedom and democracy, making members both psychologically and financially dependent, and that Scientologists should be subject to closer surveillance.