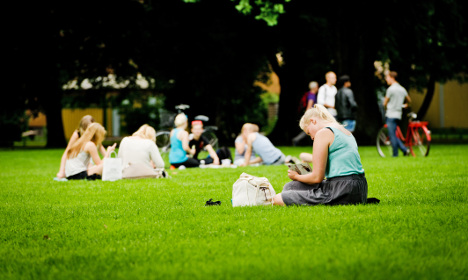 Located along the Fyrisån river, Uppsala City Garden is probably the most popular park in Uppsala and is filled with playgrounds and picnic areas. There, you can take a stroll among the flowers, sit on a bench by the river, or have a coffee at local treasure the Yellow House Café (Gula Villan).

Whether you're looking to go for an afternoon run, or simply take a break from studying and enjoy your vacation, Uppsala City Garden is one of the ideal places to go in the city. Famous botanist Carl Linnaeus received most of his higher education in Uppsala, and the city is full of references to its prestigious former resident. In another of the town's beautiful parks you can even visit one of the houses he lived in.

Uppsala’s Botanical Garden is one big tribute to his genius. We recommend going for a walk in the Baroque Garden, or visiting the Orangery and the Tropical Greenhouse – home to Uppsala's only rainforest!

The Botanical Garden is definitely the place to bring your friends and family if you want to impress them when they come to visit on a sunny weekend. Uppsala's castle is one of its most popular attractions, and the park located along the castle’s hill is as pleasant as the building itself.

Climb to the top for the best view of Uppsala Cathedral, while the stairs at the other side will lead you to the Botanical Garden.

The area truly comes alive at Walpurgis Night (Valborg), when the slopes fill with people waiting for their Mösspåtagning graduation ceremony, singing along with the local orchestra. The park is located behind the building, and provides a calm spot to have lunch or just relax in. It's also the location of a Pelle Svanslös themed playground, dedicated to the eponymous hero from a well-known Swedish children's book, who was also the star of an animated film released in the USA in the 1980s.

In English, Pelle's name is Peter-No-Tail, and as that suggests, the story is about a cat with no tail, who is taken in by a family in Uppsala. At his park in Uppsala, children can play in miniature recreations of locations from the story. Located behind Uppsala University’s economics department, Ekoparken is famous for being one of the meeting points for the annual Walpurgis celebrations at the end of April. Hundreds of people gather there to have lunch, celebrate spring and perhaps even have a drink or two.

At other more quiet times of the year, people organize barbecues and picnics with their friends in the park, or simply come along to enjoy a rare glimpse of the sun.

VIDEO: Check out The Local's video guide to Uppsala's five finest parks below