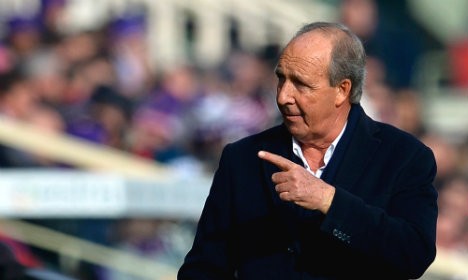 Ventura replaces Antonio Conte, who led Italy to the quarter-finals of Euro 2016 before taking over at Premier League giants Chelsea.

A respected tactician, the 68-year-old Ventura has coached a number of clubs in Italy's top flight and comes to the post following a five-year spell with Torino.

His first game in charge of Italy will be a friendly against beaten Euro 2016 finalists France in Bari on September 1st.

After admitting his “pride” at being appointed, Ventura was quick to pay tribute to his 46-year-old predecessor.

“I'm absolutely delighted to be here, but more than anything proud to have been chosen to lead one of the world's leading national football teams,” Ventura told media at Italy's national training complex at Coverciano.

“I also want to thank Antonio Conte, because he's left me not just a squad but a squad with a great work ethic and that is going to help me.

“It will give me a small advantage when I begin because, being the national team coach, I know I won't have the team with me every day.”

Conte, who was officially unveiled as Chelsea coach last week, upset predictions to steer a young and largely experimental Azzurri side to the last eight at Euro 2016.

Italy notably cruised past Belgium in their group opener, beat defending champions Spain in the last 16 and only fell at the quarter-finals during an epic, error-strewn penalty shootout with Germany.

The performance reinstalled faith in the four-time world champions, who have failed to get past the first round of the competition for the past two editions.

Italian Football Federation (FIGC) president Carlo Tavecchio admitted their feats in France had “raised our profile” but although he heaped praise on Conte he expects the wily Ventura to follow suit.

“I want to thank Antonio Conte for everything he's done for us, he created a new culture in the squad, one of sacrifice. One based on the team, not the individual,” said Tavecchio.

“I knew Conte would leave, it was to be expected. But Ventura is a football master, and was always part of my plans.”