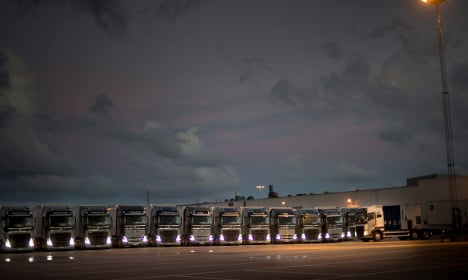 The European Commission slapped the in total more than 2.9 billion euro fine on some of Europe's largest truck makers, including Volvo, after it found that they had broken EU antitrust rules by rigging prices.

It follows a long investigation covering the years between 1997 and January 2011.

“We have today put down a marker by imposing record fines for a serious infringement. In all, there are over 30 million trucks on European roads, which account for around three quarters of inland transport of goods in Europe and play a vital role for the European economy,” said Margrethe Vestager, the commissioner for competition, in a statement.

“It is not acceptable that MAN, Volvo/Renault, Daimler, Iveco and DAF, which together account for nine out of every ten medium and heavy trucks produced in Europe, were part of a cartel instead of competing with each other. For 14 years they colluded on the pricing and on passing on the costs for meeting environmental standards to customers. This is also a clear message to companies that cartels are not accepted.”

German Daimler was fined the highest amount, around one billion euros. Italian Iveco was told to pay up 495 million euros, while DAF Trucks received a fine of 753 million. German MAN, which is part of Volkswagen, escaped punishment because it had revealed the existence of the cartel to the Commission.

All companies acknowledged their involvement and agreed to settle the case, said the statement.

“The Commission case was already more than five years under way. Without the settlement we would have been facing many more years of proceedings, with an uncertain outcome. We are now able to look forward and focus on our business,” Volvo president and CEO Martin Lundstedt said.

“While we regret what has happened, we are convinced that these events have not impacted our customers. The Volvo Group has always competed for every single transaction,” he added.

For Volvo Group, the news came on the day it announced it was planning to boost its workforce in Sweden by another 400-500 people, thanks to an unexpected rise in profits. It revealed an operating income of 6.1 billion kronor in the second quarter of 2016, beating forecasts by several million.