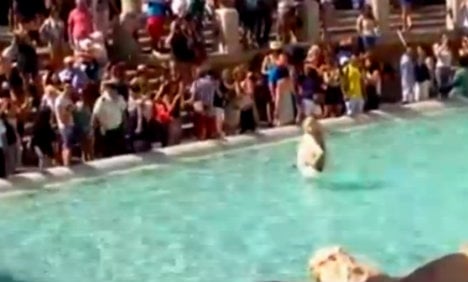 The woman was attempting to recreate an iconic scene from 'La Dolce Vita'. Photo: Screengrab/La Repubblica

As she splashed around in the 17th century Baroque fountain, which recently underwent a €2.2 million restoration, she even stopped to blow kisses to onlookers.

Some tourists snapped photos of her, while others applauded her attempt. However, her time in the water was short-lived.

A policeman quickly intervened, dragging the woman out of the famous fountain and escorting her away through the crowd.

A video of the incident can be seen below.

The act was a clear bid to recreate the famous scene from Federico Fellini's 1960 film 'La Dolce Vita' in which the late Swedish actress Anita Ekberg jumps into the Trevi.

Unlike Ekberg, who for her celluloid attempt wore a black evening dress and fur shawl, the woman appeared to be clad in a bedsheet.

Ekberg's scene has over the decades sparked countless other recreation attempts.

In 2013, Italian actress Valeria Marini was on the receiving end of a €160 fine after she immersed herself in the Trevi to have an 'Ekberg moment' of her own.

Even though historically the city's fountains were used by citizens for things like bathing and washing clothes, modern Romans don't take kindly to anybody doing anything except admiring them.

In fact, last year the authorities grew so tired of people (mostly tourists) taking illegal dips they doubled fines for transgressors to €400.

It seems to have made little difference. Earlier this month, three bikini-clad women were snapped cooling off in the city's 17th century Fontana dell'Acqua Paola.