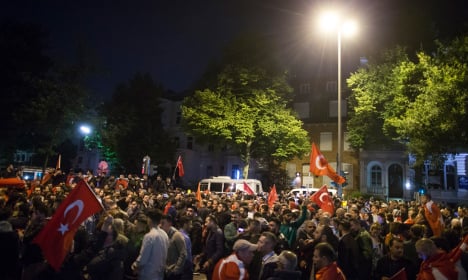 After Erdogan said Sunday that Turkey would consider a return of capital punishment, Seibert said such a move “would mean the end of EU membership talks”.

Seibert said the EU was a “community of laws and values” with which capital punishment was not compatible.

He urged a proportionate response from the government in Ankara.

“In the first hours after the failed coup, we witnessed revolting scenes of caprice and revenge against soldiers on the streets,” Seibert said. “That cannot be accepted.”

Seibert reiterated that Germany “condemns” the attempted takeover but stressed that the response by the Turkish government needs to be “proportionate” and “based on the rule of law”.

“In that context, we need to say clearly: it raises profound and worrisome questions when on the day after the coup attempt, 2,500 judges are removed from their posts,” he said.

In the aftermath of Friday's failed coup, thousands of Erdogan supporters called for capital punishment to make a return.

“In democracies, decisions are made based on what the people say. I think our government will speak with the opposition and come to a decision,” Erdogan said Sunday.

Reinstatement would create further issues between the EU and Ankara in the already stalled membership talks.

Germany has the largest ethnic Turkish community outside Turkey with some three million members.

Thousands take to streets in support of Erdogan

Thousands of supporters of Turkish president Recep Tayyip Erdogan turned out to demonstrate in cities across Germany on Sunday night.

The gatherings followed demonstrations on Friday and Saturday nights, after the failed military coup in Turkey late on Friday. The Turkish government had called on Turkish democrats in the EU to rally in support of Erdogan.

Police said that there were around 3,000 demonstrators in Berlin until the early hours of the morning, 2,400 in Stuttgart and around 2,600 in Hamburg, including women and children, FAZ reported.

As the coup got underway, Chancellor Angela Merkel's spokesperson spoke out in support of Erdogan's government, saying democratic institutions in the country “must be respected”.

Once it became clear that the attempt had failed, and as Erdogan mulled bringing back the death penalty, Germany urged that the plotters be dealt with lawfully.

The Turkish community in Germany also expressed concern about Erdogan's remarks about “retribution”, with the national chairman, Gökay Sofuoglu, telling DPA that he was watching developments with “great concern”.

Sofuoglu said that the re-introduction of the death penalty risked “slipping into the past”, adding that democracy was better than division.

The rallies over the weekend passed peacefully.