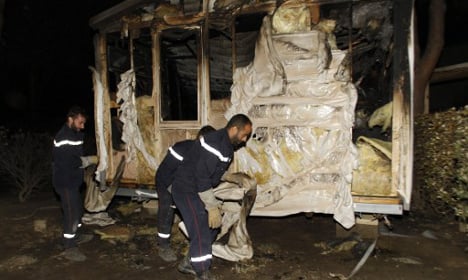 Firefighters remove debris from a mobile home destroyed in the fire. Photo: AFP

Strong winds whipped up the flames in Torreilles, Pyrenees-Orientales, where thousands of French and other European tourists were staying, with 22 bungalows completely destroyed.

“We saw smoke…the people from the campsite asked us to leave straight away and leave our cars behind us,” said one retired holidaymaker.

The fireman travelling to the site lost control of his vehicle due to an unexplained engine fault and died at the scene.

Three volunteer firefighters in the fire-engine with him were rushed to hospital in a critical condition, local official Helene Girardot told AFP. A further 17 firefighters suffered from smoke inhalation and two others were injured when one of the campers' gas canisters exploded as they battled the flames.

All but a handful of families were able to return to their camps by nightfall.