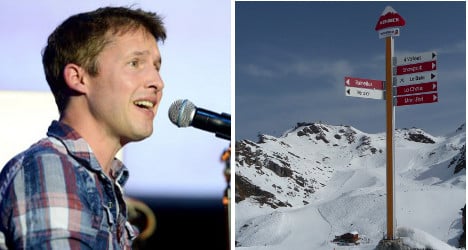 Photo: Matt Winkelmeyer/AFP and The Local

Combine this with a population that values privacy and discretion, as well as some of the world’s most incredible five star accommodation, and it’s easy to see why many celebrities take holidays here – with many choosing to go a step further and live here for some or all of the year.

“The service in Switzerland is impeccable,” Chris Southwell from Zurich-based concierge service Allowme tells The Local.

“The staff are discreet and they receive good training. You’ll often find they go above and beyond. The idea is they want their clients to come back, so they ensure they’re well looked after.”

As well as this, there’s a level of privacy in Switzerland that most celebrities find very attractive: “The Swiss themselves are private people, they’re not snapping pics [of people] on their phones all the time.”

But where exactly do the beautiful people choose to go?


Julie Andrews loves Gstaad, as did Liz Taylor, whose daughter designed this sculpture in the village, right. Photo: Valerie Macon/AFP and The Local

Some may say Gstaad’s heyday was in the 1970s during the Elizabeth Taylor/ Richard Burton era (the pair adored Gstaad, owned a chalet here and the lobby of the five-star Gstaad Palace Hotel is now decorated with larger-than life photos of them). But it’s still a hugely popular celebrity resort, hosting the likes of Madonna, Anne Hathaway, fashion designer Valentino and countless other A-listers.

Today Gstaad’s famous residents include Bernie Ecclestone, Johnny Hallyday and Julie Andrews, who was made an honorary citizen of Gstaad-Saanen in 2014. On the occasion, Andrews said in an interview with Swissinfo: “I love this village very much”.


James Blunt co-owns a restaurant in Verbier. Photo: Matt Winkelmeyer/AFP and The Local

Verbier is one of the top celebrity ski resorts in Switzerland. According to Allowme’s Southwell: “In Verbier, you get a great party atmosphere coupled with incredible skiing. Everyone wants to go and everyone does go.”

Verbier regulars include the Beckhams, Jason Streatham, Bono, Ronan Keating and James Blunt, whose local restaurant, La Vache, is hugely popular. (James Blunt also has a Verbier chairlift named after him, as does Diana Ross). Local property owners include The Duke and Duchess of York and Richard Branson, whose chalet The Lodge comes with its own 18-strong staff and costs a cool 181,580  francs ($185,000) per week to hire during peak times.

Verbier nightlife centres on The Farm Club and Coco Club and celebrities love the fact they “can go under the radar because there’s lots of people around,” says Southwell.

Often credited as the place that ‘invented’ skiing, St Moritz has a lot going for it. The ritzy Graubünden resort, which has hosted two Winter Olympics (1928 and 1948), attracts a sophisticated, if slightly older, clientele.

Back in the day, Alfred Hitchcock was a regular here, staying in Badrutt’s Palace Hotel annually for 50 years, and Charlie Chaplin was also a fan. Nowadays names such as John Travolta, Robert de Niro, Liz Hurley and Ivana Trump regularly crop up. Residents include steel magnate Lakshmi Mittal and the Heineken family.

Some of the top spots to see and be seen are Mario’s bar at Badrutt’s, the casino at the Kempinski Grand Hotel des Bains and the Dracula Club at the Kulm Hotel – a private club run by Rolf Sachs, the son of late playboy Gunter Sachs, another St Moritz regular before his death in 2011.


Freddie Mercury is immortalized by this statue in Montreux. Photo: Marcus Beuhler-Rasom/Swiss Tourism

Montreux, on the shore of Lake Geneva, has been a popular spot for artsy celebrities since Lord Byron and his mates (including Mary and Percy Shelley) lived here for several months back in 1816.

As home to the hugely popular Montreux Jazz Festival (currently running), the town has some serious musical chops. Queen frontman Freddie Mercury found a haven here, and is quoted as saying: “If you want peace of soul, come to Montreux”. Queen recorded albums here, as did David Bowie (who lived in nearby Blonay on and off for 20 years) and it’s also where Deep Purple’s Smoke on the Water was written and recorded.

Zurich is Switzerland’s biggest city and, as such, has pulling power when it comes to attracting celebs. Paris Hilton spent some serious time (and serious cash) in the city earlier this year when she was dating local billionaire Thomas Gross.

Zurich’s most famous long-term resident is probably Tina Turner, who lives down the lake in the pretty town of Kusnacht. Turner, who in 2014 got married in Zurich and became a Swiss citizen, told local news service Blick: “there’s nothing I don’t like about Switzerland.” In a 2014 advertisement for Swisscom, Turner said: “People respect each other’s privacy here [and] take care of each other”.

Zermatt is another gorgeous Swiss ski resort that is popular with the rich and famous due to its eco-credentials and the fact it’s very discreet – you won’t be hounded by paps here. The town in the canton of Valais has impeccable views of the Matterhorn and only allows electric cars, ensuring clean air and healthy living.

Popular local hangouts include mountain restaurant Chez Vrony, the Cervo for aprés ski drinks and The Vernissage – a cinema, bar, restaurant, night club and gallery in one.


Prince Charles and his sons are regulars in Klosters. Photo: Frederick Florin/AFP

The adjoining towns of Davos and Klosters in the eastern Swiss canton of Graubünden are famous for hosting the World Economic Forum (WEF) meeting. Each January the WEF attracts the world’s political, financial and business elite, and a bunch of celebrities to boot.

For the rest of the ski season the area is popular with royals, including the Danish, Swedish and British (Prince Charles stays at the Walserhof hotel and William and Kate have been spotted here) as well as celebrities such as Leonardo DiCaprio, Renee Zellweger and Bono.

According to Southwell, Davos-Klosters is a place where celebrities can enjoy a more incognito experience: “There are a lot more private chalets so people aren’t so much out in the bars… [it’s] is more about private parties with friends.”


The Beau Rivage in Lausanne was beloved by Coco Chanel. Photo: Beau Rivage

The glitzy hotels of Switzerland’s fourth-largest city draw many a celeb. In 1930, author F. Scott Fitzgerald stayed in the Hôtel de la Paix while his wife Zelda was in a local sanatorium. Designer Coco Chanel enjoyed an extended residence at Lausanne Beau-Rivage Palace Hotel between the wars (she also had a chateau in nearby Blonay, which David Bowie later owned).

Near to Lausanne, Audrey Hepburn is buried in Tolochenaz, where she lived for 30 years up until her death in 1993, while Canadian-born country singer Shania Twain lives in nearby Corseaux with her husband and son.

Its most famous local chalet owner is ex-James Bond actor Roger Moore. In a 2015 interview with Paris Match, Moore said he first fell in love with Switzerland in 1971 when visiting fellow actor David Niven’s house here (Niven died in 1983 in Château-d'Oex). Moore told Paris Match he loves Switzerland “…because it is quiet, it's not at all show business. Once a year [my wife and I] are asked to put a long dress and a tuxedo… Otherwise, the social life is minimal and it suits me perfectly.”