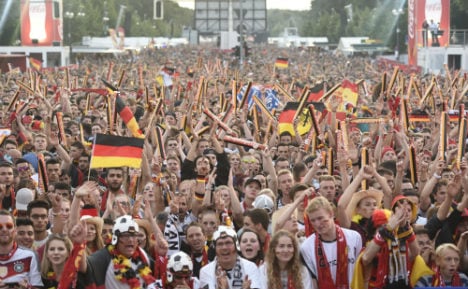 “In Iraq, this would be completely impossible, the danger of a bombing is too great” said Zaid Al-Ahmed, a 22-year-old Iraqi, as he stood among the black, red and gold-clad mass – the colours of the German flag – during Thursday's semi-final against France that saw the nation's hopes of a World Cup-Euro championship double dashed.

“It's not uncommon for there to be brawls among fans of opposing teams. In Germany, people are there to celebrate, it isn't violent,” the young man from the city of Al-Hillah adds.

Ahmed followed the first few games of the tournament on a donated flat-screen TV in the refugee hostel where he lives.

But he could not have imagined the fervent support for the side — known universally as “Die Mannschaft”, the team – that he would encounter at the public screening in the centre of the German capital.

It's just one more thing to get used to about the strange country where he arrived to apply for asylum shortly before winter, after an arduous trek across Europe.

The young Iraqi hasn't restricted himself to cheering for the white-clad Mannschaft, and now plays himself in a local club in Berlin.

“I believe football is a pillar of German culture,” explains Ines Burckhadt, pointing out that the country's stadiums are packed to the last seat for games even in deepest, chilliest winter.

Since the beginning of Euro 2016, Burckhardt has been organising “Soccer Dinners” for refugees to join Germans at home, sharing a pizza and a sofa in front of the game and getting to know their new neighbours.

“This lets refugees hang out with Germans,” she explains, rather than being hermetically sealed away in hostels.

“This way, they see that we aren't just cold people, that we can get excited,” she adds with a chuckle.

And for many of the new arrivals, German footballing heroes and the smouldering rivalries of the national league are nothing new.

“I used to follow the Bundesliga on pay TV in Iraq, especially when Bayern Munich were facing Borussia Dortmund,” Ahmed said.

In the Middle East, the Bundesliga is one of the most popular championships, says Syrian refugee Idrees Khrbotli — himself a long-time supporter of the country's best-known club.

“Bayern Munich is very well-known in Syria. Now that I live in Berlin, I support Hertha BSC [the capital's biggest club] instead,” he explains.

In fact, with the twists and turns of his escape from the brutal fighting in his homeland to Germany behind him, his routine hasn't changed all that much.

“I used to go and watch the matches in Jableh, my hometown, on Friday. Now I go and see Hertha on Saturday afternoons,” Khrbotli explains.

Like Iraqi Ahmed, he began following the Euro championship on TV with other refugees in the hostel where he lives.

But they only truly understood the power football has over Germans when they took to the streets after Die Mannschaft's epic quarter-final victory over Italy — long the nemesis of the Germans at international encounters.

“There were cars honking their horns constantly, people with flags shouting, fireworks,” said Hamed Hosseini, an Afghan who fled his country in fear of reprisals after working for the Americans.

But what was particularly strange for Hosseini was to see some Germans shouting just as loudly for Italy.

Hosseini is unfamiliar with Germans' strained relationship with their national symbols, appropriated and abused by the Nazis during 12 years of murderous dictatorship.

Even during football tournaments, brandishing the national flag or flying it from the windows of a car – or singing the national anthem in stadiums – were largely taboo until Germany hosted the World Cup in 2006.