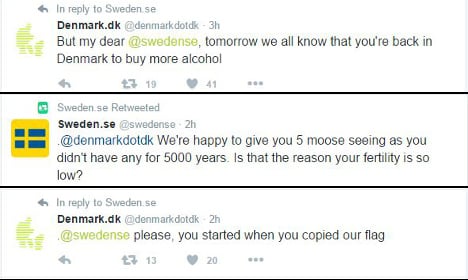 The two official Twitter accounts of Denmark and Sweden shocked many followers when they engaged in a lively argument on social media about which country is really the best.

Denmark.dk is managed by the Danish Foreign Ministry and Sweden.se by the Swedish Institute (or according to the latter's profile: “by the communications unit and a moose”).

They usually tweet and retweet various statements that promote their countries. But on Thursday, something changed. It all started when Sweden suddenly hit out at Denmark, writing that the country's many lakes are the size of smaller Denmark's entire nation.

But the Danes are not ones for sitting idly by with taunts being thrown at them. They quickly hit back, mocking their Scandinavian neighbours' famed fondness for rules.

The Twitter exchange got more and more heated. It did not take long before Sweden's expensive alcohol, elks, the Danish language, the Swedish Chef and Danish sperm banks were all fair game. Some followers expressed concern that Sweden and Denmark were back to the wars the two countries used to fight some 400 years ago, but officials quickly assured that it was just a bit of friendly sibling bickering.

“The Danes quoted us this morning, we replied to that and then we mutually kept the theme going. We are friends and know that our target audience is entertained by this content,” Ferencz Thuroczy, social media editor for the Swedish Institute, told The Local.

We at The Local must of course plead guilty to having engaged in similar arguments arguments ourselves. Here's a list where our Denmark office explained why Copenhagen is cooler than Stockholm, which was promptly followed by a rebuttal article by our Sweden-based journalists.

Read some of our favourite tweets below.

[View the story “Sweden vs Denmark on Twitter ” on Storify]