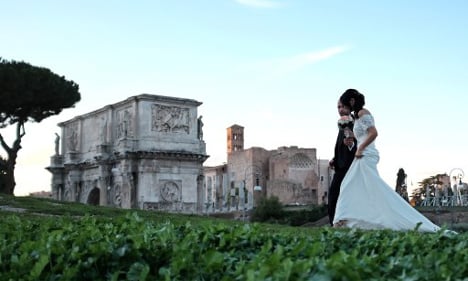 Marriage has been on the decline in the Mediterranean country for many years now, with the number of nuptials steadily decreasing.

Church weddings are in particular crisis, having experienced a dramatic 54 percent decline over the same time period.

A study by socio-economic research institute, Censis, went as far as declaring a 'death date' for religious weddings: 2031. If the current rate of decline continues, by that time not a single couple will be tying the knot in Italy's spectacular churches.

Of course, it is impossible to predict with certainty what will happen, but the study's findings fit into several trends in Italy.

For one thing, although Italy is the home of the Pope, more and more Italians are abandoning the church – just half of the country's population consider themselves to be Catholic.

And more and more couples are choosing to move in together and have children without formally tying the knot.

READ MORE: Why Italians are spurning the Church

However, while civil ceremonies are gaining popularity, in 2014 the majority of marriages (108,000) took place in church.