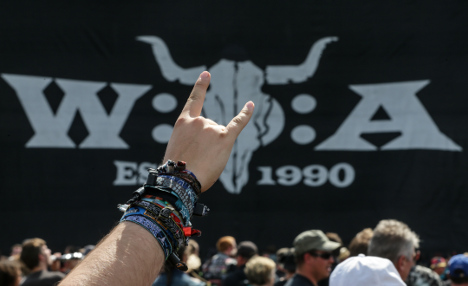 This hard rock and metal festival is a European must. This year Wacken Open Air will be attracting hardcore Scandinavian metal bands such as Arch Enemy and Marduk as well as huge international hard rock and metal names like Foreigner, Iron Maiden, Blue Öyster Cult and Whitesnake.

International heavy metal magazine Metal Blast called Wacken “the most important metal festival in the world”. If you arrive a day early, the stages will already be full of battle of the bands tournaments featuring upcoming metal bands from all over the world.

Tickets to the festival are sold out, but if you're a metalhead, it's imperative you go. You'll be sure to find some tickets floating around online. Looking for something more mainstream, but still not quite pop, and also a bit edgy? Melt is perfect, featuring a line-up mainly of indie rock artists with a few rogue choices here and there. If you decide to pay the festival a visit this year, you'll be treated to performances by M83, Skepta, Tame Impala, Jamie xx, Two Door Cinema Club and Chvrches.

Melt's clinch is its entirely unique location. Around two hours south of Berlin, the festival takes place on a small peninsula called Ferropolis (city of steel), surrounded by a beautiful lake. The peninsula itself is littered with old machinery up to 30 metres in height, as the area used to be a mining site and is now an open-air industrial machine museum for the rest of the year.

If you think a whole weekend would be too much of a good thing, you have the option to buy a ticket for a single day out of the three. Giraffes carved out of wood at Tollwood Summerfestival. Photo: DPA

Tollwood is less of a strictly-organised weekend festival and more of a four-week extravaganza, attracting on average 1.5 million visitors. Individual concerts from one artist will take place on a certain night, and you pay to see whichever you want. Upcoming performances include Beirut on July 10th, Anastacia on the 11th, Deep Purple on the 19th and Rea Garvey on the 24th.

The festival is not just music-based. There will also be comedy and cabaret going on around the festival area, and three quarters of all acts at Tollwood are free to see. This two-day festival is a branch of the American Lollapalooza held in Chicago's Grant Park, and is the first in Europe. Despite only being in its second year, Melvin Benn, one of the festival's promoters, claimed: “I don’t know if there’s a more visually attractive festival in Germany.”

This year's line-up is full of worldwide rock and dance sensations such as Radiohead, Kings of Leon, New Order, Major Lazer and the Kaiser Chiefs.

There is a special area called Der Grüne Kiez, where you can take a break from the music and enjoy some calm time with a glass of wine in the gardens with some vegan or vegetarian food. There will also be art installations made from recycled materials along with workshops and street theatre.

Sick of hustle and bustle? Want to tone it down? This relaxed festival might be right up your street. This year the weekend incorporates acts like Sigur Rós, Noel Gallagher's High Flying Birds and Garbage.

But A Summer's Tale is more of an all-rounder than a festival specifically geared towards music. There are a monumental number of workshops on offer, and you can spend the weekend learning yoga, finger knitting, or practising slam poetry. If you explore the park, you might also find movies on show, art performances and authors giving readings of their books. This four-day festival at one of Bavaria's most popular holiday spots, the Chiemsee, is an unusual mix of fresh, lively music. The line-up consists of rock, electro and reggae artists including Limp Bizkit, Sum 41, The Prodigy, Steve Aoki and Damian Marley.

The Chiemsee is the biggest lake in Bavaria, and you can go for a swim to freshen up in the morning after a big night of partying. You can also hire a kayak or a boat and explore the waters with the mellifluous sound of The Prodigy giving you a peaceful soundtrack.