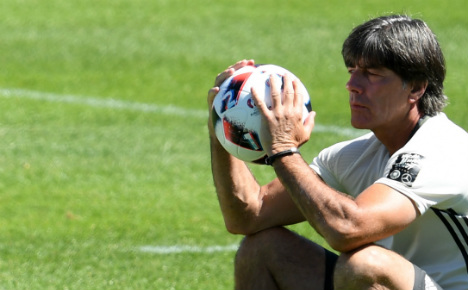 “It's great that there's a game like this. I love playing knock-out games against teams of this calibre,” said Löw in Evian on Monday.

Löw's cause for optimism over the Marseille semi-final is not obvious with three key players definitely ruled out, while captain Bastian Schweinsteiger is doubtful with a new knee injury.

Germany have defender Mats Hummels suspended while Mario Gomez and Sami Khedira are out with injury. Gomez will miss the rest of the tournament.

As Löw acknowledged, France were buoyed by Sunday's 5-2 hammering of minnows Iceland in their quarter-final.

And the hosts can expect near fanatical support in Marseille, the heartland of the nation's die-hard fans.

“I'm not worried about who the favourite is,” said Germany's head coach.

“It would be easy to say that we have a few injuries and France are favourites as they played really well.

“It is like it was against Italy: a game of two teams with outstanding individuals. Both have a clear direction, even if France naturally plays offensively. I love games like this.”

Löw was very clear that Schweinsteiger, who has a strained knee, will only face France if fully fit.

The Manchester United star had only recently recovered from tearing the medial ligament in his right knee in March.

“I made that mistake once before in my career and I won't do it again.”

Löw refused to be drawn about the mistake he referred to — passing it off from earlier in his career as a club coach.

But he has been in this situation before with Germany.

Löw played Michael Ballack in the Euro 2008 final, when Germany were beaten 1-0 by Spain, when the defensive midfielder was carrying a calf injury.

With Gomez sidelined by a torn thigh, Bayern Munich pair Thomas Müller and Mario Götze are the most likely options to feature up front against France.

Löw says both could even start.

“It would be an option [to start Müller up front], but perhaps we'll play with two strikers, I still have to weigh things up,” he said.

With Khedira out with a partially torn groin and Schweinsteiger doubtful with a knee strain, Löw has a bigger problem to resolve in the defensive midfield.

Liverpool's Emre Can or Borussia Dortmund's Julian Weigl are the most likely candidates to partner Toni Kroos in Marseille.

Löw was clear that Joshua Kimmich, Germany's 21-year-old hero in Bordeaux for converting one of the spot-kicks in the shoot-out marathon, will stay at right-back, even though he is a defensive midfielder.

“That is not something to consider,” said Löw.

“Joshua Kimmich has always played for us in that position [right-back].

“It was an option to move him there during the Italy match, if I had had to, but not for the game against France, I have other midfield options.”