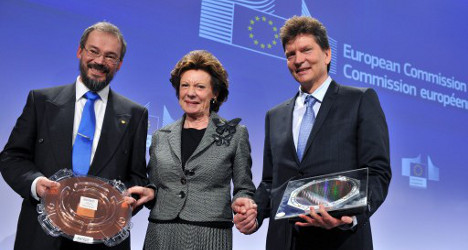 In an interview with 24 Heures, the rector of Geneva University, Yves Flückiger, said he was worried Switzerland wouldn’t find a solution to its immigration question before the deadline of next February because the EU wanted to tackle Britain’s situation first.

“I think Europe will be less inclined to make an agreement that’s favourable to Switzerland since that would open the way for a ‘disguised retention’ of the UK with particular clauses,” he said, adding that “If concessions must be made, they will be made for the UK first”.

If no deal is found between the EU and Switzerland, Swiss scientists run the risk of being blocked from European research projects such as Horizon 2020, a €80 billion, seven-year science and innovation programme that began in 2014.

For the past two years Switzerland has been struggling to find a way forward after the public voted to bring in immigration curbs, contradicting Switzerland’s bilateral agreement with the EU regarding the free movement of people.

In the immediate wake of the vote – which Switzerland has until February 2017 to implement – Brussels reacted in anger, freezing grants for Swiss scientists participating in Horizon 2020, forcing the Swiss government to plug the gap.

Since then Switzerland’s scientists have been marginalized, Flückiger told 24 Heures on Friday.

“Between 2007 and 2013 Switzerland coordinated 972 European research projects (3.9 percent of the total), putting it in seventh place. In proportion to its population, it was in first place. Today it’s 24th and second to last, with only 15 projects,” he said.

“Our researchers haven’t become worse. They’ve simply not been retained because of the climate of uncertainty. We can still participate, but are often told ‘perhaps you won’t be able to remain or coordinate the project to the end.’”

Switzerland is one of Europe’s leading forces when it comes to science and innovation, and its economy is boosted by the sector.

Between 2007 and 2013 the University of Geneva received 100 million euros in EU funding for research projects, while Lausanne technology institute EPFL is leading the EU-funded €1.2bn Human Brain project, of which Flückiger said “Right now, we are wondering if the second slice of the funding will be granted”.

Should Switzerland fail to reach an agreement over immigration, its exclusion from European projects would have major consequences for Swiss-led research, and therefore the economy.

“Before the 2014 vote each Swiss project had two or three more times the chance of being retained than other European projects. We had this success because we are capable of attracting the best researchers in the world.

“Switzerland is too small a country to guarantee such a performance with its own resources alone.”