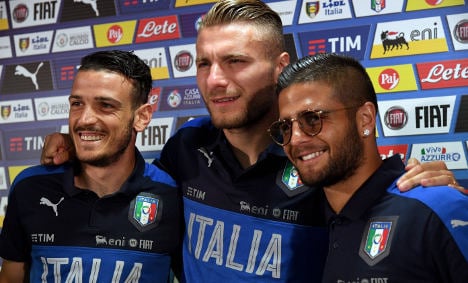 “But we're a team, and we are capable of achieving something great here.”

Given little hope following their second successive first-round exit from the World Cup two years ago, the Azzurri have surprised their fans.

On paper Germany have the edge in the vintage clash.

They are the only team in the quarter-finals not to have conceded a goal and, for many fans, the memory of their 7-1 semi-final humiliation of Brazil on their way to victory in the 2014 World Cup remains fresh.

Yet Die Mannschaft are chasing a first win over the Azzurri in a major tournament at the ninth attempt.

Two first-half Mario Balotelli goals ended Germany's hopes in the semi-finals of Euro 2012, where Italy were routed 4-0 by Spain in the final.

Despite a morale-bosting 3-0 last 16 win over Slovakia, Germany defender Mats Hummels said: “Italy is not Slovakia and we realise that we'll need to bring more to the table.”

Germany's tabloid newspapers have called on Loew's men to redress the balance, but Torino striker Ciro Immobile is not impressed.

“We've beaten them so many times … they're just trying to cover themselves,” from eventual criticism, said Immobile, who scored four goals in five Champions League matches for Borussia Dortmund in a short spell in the Bundesliga.

“We know Germany are strong and will be sure of themselves. But our victory over Spain has really lifted our confidence.

“We'll let the pitch do the talking.”

If Italy appear transformed, it is in large part thanks to Chelsea-bound Conte.

Two years after ending a triumphant, three-year spell with Juventus to become Italy coach, Blues fans are getting a glimpse of what could come next season.

Conte's has called for team unity in the face of almost every kind of adversity and Italy are reaping the benefits.

Napoli winger Lorenzo Insigne has yet to start for Italy at Euro 2016. But he hailed Conte's approach.

“Conte is really showing the grit that he was famous for as a player, and it's being passed on to us,” said Insigne.

“He's teaching us a lot, right down to the smallest details.

“It's not important who scores,” added Insigne, who hit the post late in their 1-0 defeat to the Republic of Ireland.

“We have to win together if we want to qualify. That's been our strength from the start. No one is jealous of any one in this squad.”

Conte's team-building strategy includes kissing and hugging his players before they go on to the pitch.

“He (Conte) doesn't just kiss me, he does it with everyone,” said Florenzi.

“We're a united group, and he's been filling us with confidence since the start.

“It doesn't matter who's going on, he gives him the same motivation as everyone else.”

Affection might not be enough against a Germany side determined to shake the Italian monkey off their back.

But Florenzi added: “Conte came to this job armed with all his technical and tactical knowledge, as well as the strong personality that he had as a player.

“After the work we've put in the past two years, we're ready for a big performance. It won't be easy, but let's keep on hoping, for us and the fans.”