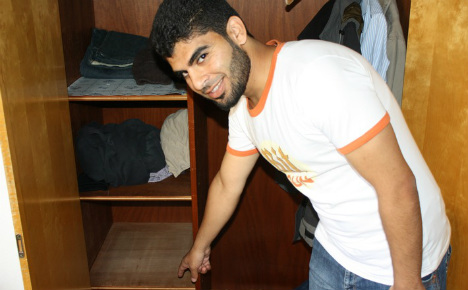 Muhannad M. found the €150,000 shortly after he had moved into his new flat in Minden, North Rhine-Westphalia, police report.

He was able to kit out his new pad thanks largely to money donated through charities, and one of the new furnishings he bought was an old wardrobe.

When the 25-year-old cleaned out the wardrobe, he noticed that there was a hidden compartment inside, where two sheets of wood had been screwed together.

“They were all new €500 notes. I thought it was fake money,” he told national newspaper Bild. So he researched online how to tell real bank notes from fake ones and came to the conclusion that this was the real deal.

But rather than keep the cash for himself, he informed the migration authorities, who in turn let the police know.

“I am a Muslim. I’m not allowed to keep this money. My religion forbids it,” he explained.

“Allah would never allow me to finance my own interests with someone else’s wealth.” Police are now looking into who the money belonged to.

“This young man has acted in an exemplary way and deserves great respect,” a police spokesperson said.

“It sometimes happens that smaller amounts of money are handed in. But this kind of money is the absolute exception.”

Muhannad arrived in Germany in October 2015. The rest of his family are still in Syria, where a civil war has destroyed large parts of the country since it broke out in 2011.

The young communications student from Homs isn’t going away completely empty handed, though. He will receive a finder’s fee of three percent of the value of the money.