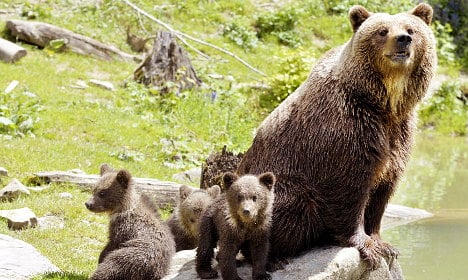 A mother bear and her three cubs in Switzerland (yes, Switzerland, not Sweden). Photo: Walter Bieri/AP/Keystone

Some young bear mothers have taken to living closer to humans for the duration of the mating season — a period which sends male bears, called boars, into frenzies of lust-fuelled cub killing.

Motherly instinct, in other words, seems to trump sex drive.

While sows grin and bear the potentially threatening human proximity for the sake of their offspring, boars continue to give the two-legged species a very wide berth.

“Bears in general avoid areas close to humans,” said Sam Steyaert of the Norwegian University of Life Sciences, who co-authored the study in the journal Proceedings of the Royal Society B.

“Also, after the mating season, females with cubs change their behaviour” and go back to avoiding humans, who hunt bears in the forest during a designated season.

Male brown bears kill cubs to trigger oestrus — a period of sexual receptivity — in females who would otherwise have come into heat only after raising their cubs to independence.

This means that instead of having to wait 18-30 months, the males “can obtain a mating opportunity in just a few days,” Steyaert told AFP.

The behaviour is called sexually selected infanticide, and has also been observed in birds, bats, primates and big cats.

It is common in brown bears, with as much as a third of cubs in the Swedish forest losing their lives to roving males during the annual mating season, from early May to mid-July.

Steyaert and a team tracked 26 mother bears using GPS technology between 2005 and 2012.

Of the sows, 16 successfully raised cubs, and 10 failed.

“The median distance of successful females to human habitation was about 780 metres,” Steyaert told AFP by email.

For unsuccessful ones it was 1,210 metres, nearly half a kilometre farther away.

Other, less successful strategies, included trying to fight off the aggressors.

The prize this year has been awarded to Germany’s Benjamin List and David MacMillan from Scotland, based in the US.

The Nobel Committee stated that the duo were awarded the prize “for their development of a precise new tool for molecular construction: organocatalysis”. The committee further explained that this tool “has had a great impact on pharmaceutical research, and has made chemistry greener”.

Their tool, which they developed independently of each other in 2000, can be used to control and accelerate chemical reactions, exerting a big impact on drugs research. Prior to their work, scientists believed there were only two types of catalysts — metals and enzymes.

The new technique, which relies on small organic molecules and which is called “asymmetric organocatalysis” is widely used in pharmaceuticals, allowing drug makers to streamline the production of medicines for depression and respiratory infections, among others. Organocatalysts allow several steps in a production process to be performed in an unbroken sequence, considerably reducing waste in chemical manufacturing, the Nobel committee at the Royal Swedish Academy of Sciences said.

The Nobel committee gave more information in a press release as to why List and MacMillan were chosen: “Organocatalysis has developed at an astounding speed since 2000. Benjamin List and David MacMillan remain leaders in the field, and have shown that organic catalysts can be used to drive multitudes of chemical reactions. Using these reactions, researchers can now more efficiently construct anything from new pharmaceuticals to molecules that can capture light in solar cells. In this way, organocatalysts are bringing the greatest benefit to humankind.”

“I thought somebody was making a joke. I was sitting at breakfast with my wife,” List told reporters by telephone during a press conference after the prize was announced. In past years, he said his wife has joked that he should keep an eye on his phone for a call from Sweden. “But today we didn’t even make the joke,” List said. “It’s hard to describe what you feel in that moment, but it was a very special moment that I will never forget.”