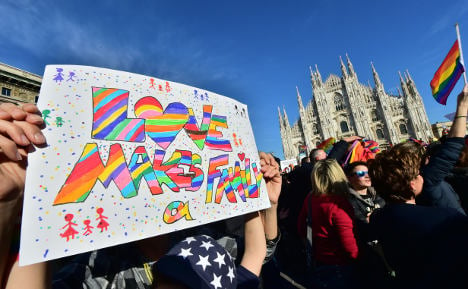 As rulings passed by Italy's top court hold precedent over the decisions of lower courts, the judgment will make it easier for same-sex couples in Italy to adopt each other's children. However, adoption rights will still be granted on a case-by-case basis.

The ruling represents the first time Italy's Court of Cassation has issued a judgment on a stepchild adoption case involving a gay couple, La Stampa reported.

“Following rigorous investigation carried out by the judge, the decision was made as it is fully within the interests of the child,” the court said.

The woman had been granted parental rights by an appeals court in Rome last year but city prosecutors were attempting to overturn the decision in the top court.

Prosecutors argued that while Italy's current adoption laws, which date back to 1983, do not forbid a homosexual couple from adopting a child per sé, the laws “only make reference to the adoption of children in difficult circumstances, for example, those who have been abused or mistreated.”

The two women, both from Rome, have been together since 2003 and in 2006 travelled to Spain so that the child's mother could conceive the child artificially using in-vitro fertilization (IVF) techniques.

The issue of stepchild adoption took centre stage during the debate over Italy's civil unions bill, which was passed in May.

Italy became the last major European country to pass a law extending some sort of rights to gay people, but not before a contentious clause that would have legalized stepchild adoption was removed from the bill amid staunch opposition from factions of Italy's right-wing and the Catholic Church.

RIGHTS
How long can Brits stay in the UK without losing their EU residency?