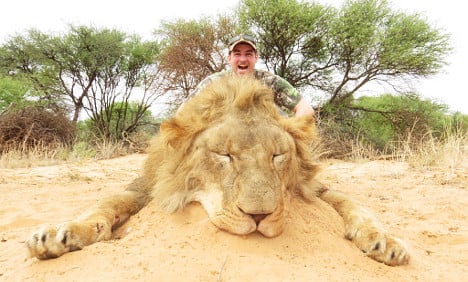 This picture that Angelo Vukasovic posted to his Facebook page has angered many Swedes.

This week photos from hunting trips to Africa began circulating on social media that show him posing with a lion, a giraffe and hippo he had hunted and killed.

Many commenters were furious at a perceived lack of respect for the animals, but Vukasovic was unrepentant.

“I’ve eaten 80 percent of the animals I’ve killed, including the lion in the picture,” he told newspaper Aftonbladet.

“The tastiest meat I’ve ever eaten, and will ever eat, is giraffe,” he added.

Vukasovic, who organizes hunting trips, said the photos were taken in South Africa and that the hunt was 100 percent legal.

“Hunting certain animals benefits people and benefits the animal. Previously hunting rhino hunting was banned, and now suddenly they’ve permitted it and there’s a reason for that,” he told the newspaper.

He added that the local authorities allowed hunting in areas where animals were starving due to a lack of food and water.

Commenters on his Facebook page however called him a “disgrace to Sweden” and a “caveman”.

When The Local reached Vukasovic by phone on Tuesday he said he didn’t have time to talk:

“I have customers in my shop right now. They’re much more important to me than you.”

The Sweden Democrats said on Tuesday they were looking into the matter before deciding whether to take any action.

“We were dismayed to see the images,” the head of the government’s directorate-general for animal protection, Sergio Garcia Torres, told AFP.

“It is a blatant case of animal abuse.”

Footage published Thursday by Cruelty Free International shows appears to show animals at the Vivotecnia animal testing facility being cut into apparently without having received anaesthetics.

Staff were also filmed swinging dogs and rats around and in one clip someone is drawing a face on a monkey’s genitals as the animal is pinned to a table.

The group said the footage was taken by a whistleblower who worked at the facility, which is on the outskirts of Madrid, between 2018 and 2020.

“There can be no doubt that such gratuitous cruelty causes unnecessary distress and suffering,” the animal rights group said in a statement.

“It is also unlawful.”

Police and public prosecutors said Monday they had opened separate investigations into Vivotecnia, which carries out experiments on animals for the pharmaceutical, cosmetic and food industries.

The company’s phone number was no longer working on Monday and its web site was down for maintenance.

In a statement cited by Spanish media, Vivotecnia chief executive Andres Konig said he was “shocked” at the images. But, he added, they did not “demonstrate the day-to-day reality at Vivotecnia”.

Following the outcry caused by the release of the footage, the Madrid regional government on Sunday temporarily halted activity at the animal testing facility.

Animal rights political party PACMA has filed a lawsuit against the managers of the company and urged the government to step up its supervision of animal testing.

“It’s a very opaque world and it could be that this is happening regularly without us knowing,” PACMA president Laura Duarte told AFP.

The Vivotecnia laboratory animals were examined by veterinarians and are being moved to other facilities.