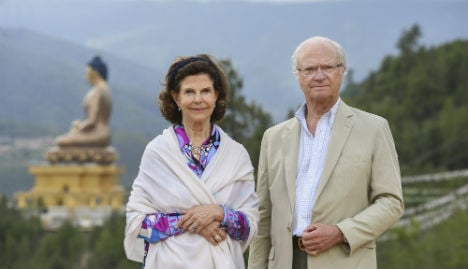 King Carl XVI Gustaf and Queen Silvia during their official visit to Bhutan. Photo: Jonas Ekströmer/TT
King Carl XVI Gustaf arrived on Saturday evening, driving himself to the palace in his Ferrari.
Sweden’s Expressen newspaper pointed that Princess Madeleine, who moved to London last autumn because of her banker husband Christopher O’Neill’s job, would not be attending.  “Unfortunately we are not at home,” she said.
According to the newspaper, the couple are playing down the anniversary because of the year’s packed programme, with two royal births, the King’s 70th birthday, and the Christening of Prince Oscar all taking place within a few months.
All that the Royal Palace is putting on in commemoration is an ​​exhibition of the five royal wedding dresses worn by Queen Silvia, Crown Princess Victoria, Princess Madeleine, Princess Sofia and Princess Lilian, which will open on October 22 at the Royal Palace in Stockholm and run until March 5.
Carl XVI Gustaf played up the couple’s unwillingness to make much of their anniversary when approached by Expressen during a state tour of Bhutan.
“Is it 40 years? Congratulations!” he joked to Queen Silvia when. “40 years!? That’s something I want to know everything about! But very briefly.”
He then went on more seriously:  “I think she has done very well over all these years. We have been able to be supportive of each other.”
In an interview with Aftonbladet before the couple set off for Bhutan, Queen Silvia reminisced about her first encounter witj the then Crown Prince.
“It began with a laugh. I turned around and there was someone watching me with binoculars —— from one meter away. It was astounding,” she laughed. “The King has the special sense of humour.“
Carl XVI Gustaf met Silvia Sommerlath when she was working as a hostess at the 1972 summer Olympics in Munich, Germany, and he kept their relationship secret for several years after he became King the following year.
The two married on June 19 1976 in the Storkyrken cathedral in Stockholm’s old town, in what was the first Royal wedding in Sweden since 1797.
They left the ceremony in a horse-drawn carriage to meet a crowd of 180,000 well-wishers thronging the Stockholm streets.
Here is the official wedding picture from 1976, taken by Lennart Nilsson. As they were visiting the minute mountain village of Bjara to inaugurate a new water pump, the King told Expressen that the visit served as a good example of the kinds of experiences the couple had enjoyed together over the decades.
“Just take a situation such as today. Now we are standing here in a small village in Bhutan — it is a little fascinating, I think. Over the years, we have made all these trips together and represented Sweden, both at home and abroad. We work together after all, and it is not everyone who can do that.”
“It seems that this has become a 40-year honeymoon?” the Queen then chipped in.
“Well. Not really,” he answered, pointing to the press. “A honeymoon with all you lot would probably have been fantastic.”
Below is the backside of Solliden.