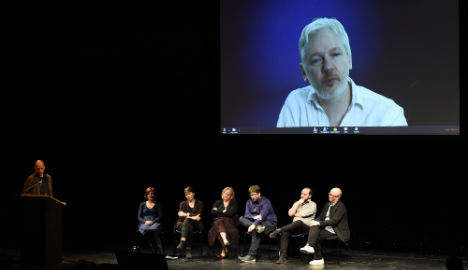 Julian Assange addresses supporters such as Yanis Varoufakis at the launch of the Democracy in Europe Movement in February. Photo: Tobias Schwartz/AFP
Supporters said they were planning to stage songs, speeches and readings in several European cities.
Assange, 44, is wanted for questioning over a 2010 rape allegation in Sweden but has been inside Ecuador's UK mission for four full years in a bid to avoid extradition.
The anti-secrecy campaigner, who denies the allegation, walked into the embassy of his own free will on June 18, 2012, with Britain on the brink of sending him to Stockholm, and has not left since.
His lawyers say he is angry that Swedish prosecutors are still maintaining the European arrest warrant against him.
The Australian former computer hacker fears that from Sweden he could be extradited to the United States over WikiLeaks' release of 500,000 secret military files, where he could face a long prison sentence.
Listed participants in Sunday's anniversary events include Patti Smith, Brian Eno, PJ Harvey, Noam Chomsky, Yanis Varoufakis, Ai Weiwei, Vivienne Westwood, Michael Moore and Ken Loach.
Croatian philosopher Srecko Horvat, an event organiser, said: “We live in a critical time. We are gathering all around the world on June 19 to speak out for Julian, because he has spoken out for all of us.”
Veteran leftist film-maker Loach said Britain's legal system was “being manipulated to keep a brave man in isolation” and that “all who care about freedom of information should demand that the threats made against Julian should be lifted.
“He should be able to leave his place of safety without fear of deportation or being handed over to those who intend him harm.”
A hero to supporters and a dangerous egocentric to detractors, Assange founded WikiLeaks in 2006 and has been portrayed in two movies in recent years.
Assange has compared living inside the embassy — which has no garden but is in the plush Knightsbridge district, near Harrods department store — to life on a space station.
His 15 feet by 13 feet (4.6 by 4 metre) room is divided into an office and a living area. He has a treadmill, shower, microwave and sun lamp and spends most of his day at his computer.
He got a cat in May to give him some company.
Last month a Stockholm district court maintained a European arrest warrant against Assange, rejecting his lawyers' request to have it lifted.
“The court considers that Julian Assange is still suspected of rape… and that there is still a risk that he will abscond or evade justice,” it said in a statement.
Assange will appeal the ruling, one of his Swedish lawyers, Per Samuelsson, told AFP.
“He is not surprised but very critical and angry,” he said.
Assange's lawyers requested the lifting of the warrant after the UN Working Group on Arbitrary Detention issued a non-binding legal opinion on February 5 saying his confinement in the Ecuadoran embassy amounted to arbitrary detention by Sweden and Britain.
London and Stockholm have angrily disputed the group's findings.
The alleged crime dates back to 2010 and the statute of limitations expires in 2020.
Assange is calling for Britain to leave the European Union in Thursday's referendum on its membership of the bloc.
He alleges that British authorities “repeatedly use the EU as political cover for its own decision-making”, highlighting the European arrest warrant. 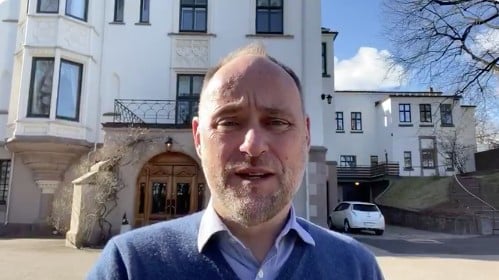 British ambassador Richard Wood takes a break from quarantine last week. Photo: Screenshot/Twitter
He spoke to The Local as he launched a video appeal to British people in Norway temporarily for business or a holiday to take the next available flight back to the UK.
“There are still daily flights on British Airways and also some regional flights to Aberdeen at the time of speaking, but I don't know for how long,” he said.
“People risk finding themselves stuck here against their will once the travel options have run out, and they will then be separated from friends and family in the UK. They may also not be covered for medical care in Norway if they were to fall ill.”

An update for all ?? nationals travelling in ?? from @RichWoodUK

▶️ If you are wanting to leave ?? you need to speak to your airline/tour operator ASAP and make plans today #COVID19norway #coronavirus #COVID19norge @FCOtravel pic.twitter.com/Eawutw79hN

Most of the British citizens who were in Norway at the time of the country's lockdown was announced on March 12 have already managed to make it back to the UK, Wood said.
Initially, many were confused when the rules were announced.
“The announcement caught people by surprise, and it was made retrospective, so there were a number of tourists already in the country who were told that they had to go into quarantine, and it wasn't clear to them whether they had the option of leaving, or whether they had to stay the full two weeks.”
The embassy worked with Norway's authorities to clarify that day that non-residents who chose to leave the country immediately would not need to spend 14 days in quarantine.
Embassy staff then had to negotiate with Norwegian county and municipal governments who were unwilling to let foreigners they believed should be in quarantine travel to airports.
Now, the few who are still left in Norway are stuck because of flight cancellations.
“We're aware of a couple of groups of people who have had difficulties because successive flighs have been cancelled,” he said. “We're not aware of any people who seem to be stuck here without any possibility of return.”
Aside from getting Brits in Norway home, he said, he has also helped get Norwegian citizens back to the UK by finding space for them on flights for British nationals.
Beyond the consular side of things, the UK also had to repatriate British troops and military equipment from norther Norway where they were preparing to take part in a Nato exercise.
Then there is work ongoing ensuring supplies of Norwegian gas and electricity to the UK if the crisis worsens, and ensuring fish exports can still make it to UK supermarkets even if road borders are closed across Europe.
And that all needs to be done with most staff out of the office.
“It's quite interesting,” Wood said. “We're adjusting to new ways of doing things: we have all of our meetings by video conferencing and audio conferencing. We are keeping the embassy open. It's certainly open for business, and we're still doing the things we would be normally — talking to companies, talking to the ministries — we're just doing it differently.”
Here's a tweet from the UK embassy describing the new work conditions.

Covid-19 has resulted in us thinking differently about how we work. @UKinNorway staff have been extremely flexible – some working at the embassy (with social distancing), whilst others work from home ??⬇️ #hjemmekontor #wfh #flexibleworking #COVID19norway pic.twitter.com/mIuFFZxRhi

An update from @RichWoodUK on the Embassy’s work during the COVID-19 crisis.