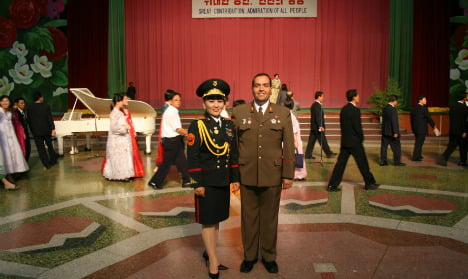 Police in Tarragona, confirmed to The Local it was an operation led by Guardia Civil in Madrid, who would give no further comment on the ongoing investigation.

Cao de Benós was arrested in Tarragona, Catalonia, while another man was arrested as part of the same investigation in Murcia. This second man had rigged a starting pistol to shoot real ammunition.

Cao de Benós, 42, from Barcelona was arrested just a day after speaking to The Local about his job as the only foreigner working for the North Korean regime.

He holds the position of  honorary special delegate for the DPRK’s Committee for Cultural Relations with Foreign Countries – a one-man publicity machine for North Korea abroad.

He visits the country as often as twice a month and receives a rapturous reception when he touches down in Pyongyang.

“I feel Catalan and Spanish by birth and North Korean by adoption,” Cao de Benós , whose Korean name is Cho Son-il ('Korea is one'), told The Local, adding that there were more similarities between North Korea and Spain than one might expect.

“I would say that the North Koreans are the 'Latinos' of Asia. Compared to my Japanese, Chinese or Thai friends, Koreans show their feelings like hugging family members and friends, crying, laughing and being quite expressive. They also like to stay up late at night, talking and drinking,” Cao de Benós added.

Cao de Benós became fascinated with North Korea when he was 16 and founded the Korean Friendship Association in 2000 and has members from 120 countries – most from the United States – as well as offices in the DPRK, Spain, Norway and Thailand.