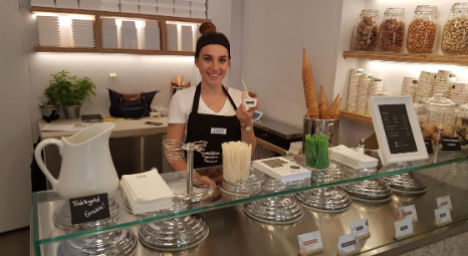 According to the Chamber of Commerce, there is an ice-cream parlour for every 15,000 people in Austria. That's even higher than Italy, a country with a much longer ice-cream tradition.

Austria – and in particular Vienna – has seen a boom in ice-cream shops in recent years, with the capital now home to 154 parlours, plus countless coffeehouses and cake shops also selling ice-cream as a side product. The country first became seriously interested in ice-cream around the mid-19th Century when Italian ice-cream makers moved to Austria and brought their delicious products with them.

Already a hotspot for luxury cakes at the time, the country welcomed top-quality ice-cream into the mix. Today, the Viennese love it so much they are even hosting a festival to celebrate all things ice-cream, taking place in August in the city's Burggarten.

To get your taste-buds tingling, here is a list of some of Vienna’s top ice-cream salons to try out this summer.

Leones Gelato
Lange Gasse 78, 1080 (and new pop-up in Praterstrasse, 1020)
Having launched their flagship store in Vienna’s 8th district just last summer, Leones Gelato is the new kid on the block. But with a second store opening on Praterstrasse, the focus on natural products and flavours is obviously working. In their words, they make: “traditional Italian ice-cream out of fresh, natural ingredients. No artificial additives. No ifs, no buts.” Some of their deliciously creamy but natural flavours include blood orange, lemon, dark chocolate and the popular ‘milcheis’. If you are not keen on overly-sweet ice-cream, this is the place for you.

Veganista
Neustiftgasse 23/3, 1070, Margaretenstraße 51, 1050 and Alserbachstraße 5, 1090
The first vegan ice-cream shop to arrive to Vienna, Veganista has definitely made its mark on the city’s trendier residents. The ice-cream is made fresh every day, with around 18 flavours to choose from, including more unusual options such as green tea or orange, saffron and olive. Truly delicious and not over-loaded with sugar, this is a great place for vegans to show their vegan-sceptic friends the light.

Summer Samba
Yppengasse 1, 1160
Want something a bit more exotic? Pop by the Summer Samba ice-cream shop in Yppenplatz. They focus on tropical flavours that you will struggle to find in other parlours, including cashew apple, guava or acerola. It’s a little taste of Brasil in central Europe. Delicioso!

Tuchlauben
Tuchlauben 15, 1010
This traditional Italian family-run business has been serving up ice-cream to the Viennese since the 1960s. Priding themselves on high quality service, they make their ice-creams using regional products, including milk from Austrian cows. With a terrace open in summertime, it’s perfect for those who like to sit and take their time over an ice-cream made in “traditional Italian” style.

Eis-Greißler
Rotenturmstraße 14, 1010, Mariahilfer  Straße 33, 1060
With a focus on all things organic, the Eis-greißler stores are some of the city’s most popular ice-cream hangouts. Alongside more traditional fruit sorbets, you can find butter biscuit (keks), elderflower, pumpkin seed oil, topfen and – if you’re brave enough – goats cheese flavour. They also have plenty of vegan options. Not in Vienna? No fear: they also have stores in Wiener Neustadt, Klagenfurt, and Graz.

Zanoni & Zanoni
Lugeck 7, Graben 19, Burgring 1, all in 1010
Want a bit of breakfast with your ice-cream? Why not. A glass of prosecco? Sure. The Zanoni & Zanoni shops in the first district might be the place to head to. The range here is quite broad, from sundaes and cones to profiteroles and pancakes. They also offer vegan options and frozen yoghurt. It’s a popular spot with locals and tourists alike but perfect for when you’re looking to cool down while wandering around the first district.