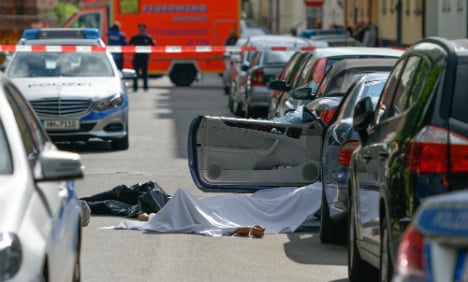 The victim in Harburg. Photo: DPA

At 7.40am a 43-year-old Serbian national was fatally wounded by gunfire as he drove through the Harburg neighbourhood in the south of the city, police report.

City prosecutors and homicide investigators have now taken over the case.

According to what police have so far established, the man parked his Mercedes in Steinikestraße when another vehicle pulled up beside him. A man sitting in the other vehicle then pulled out a weapon and shot him.

The 43-year-old was severely injured in the incident and died despite attempts by paramedics to resuscitate him.

Pictures from the scene showed the glass in the driver-side window completely shattered by the bullet, while the body lay on the ground next to the car covered by a white blanket.

Police carried out a wide-scale hunt for the assailants involving 30 cars and a helicopter.

In the process they managed to find the car which they believe the attackers had fled in. They later arrested two suspects, a 27-year-old Serbian and another man of the same nationality.

The incident comes just days after a cyclist was shot and killed in broad daylight in the Bergedorf neighbourhood of the port city.

The gunman, who was described as being between 20 and 25 years old and wearing shorts, a white T-Shirt and a dark baseball cap, is still on the run, Spiegel reports.

In the most recent police figures on gun crime from 2014, Hamburg does not figure as particularly prone to this form of criminality.

Saxony-Anhalt, Lower Saxony and Bremen had the highest gun crime figures in relation to the size of their populations.