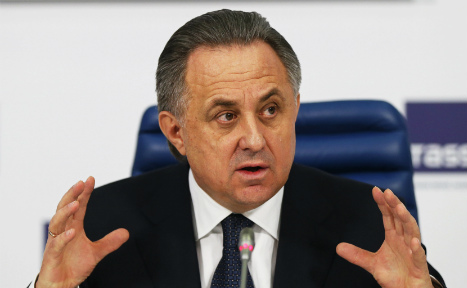 According to the documentary seen by AFP before it was to be aired later Wednesday, Russian authorities have been covering up for coaches disgraced by the doping programme.

The investigation by public broadcaster ARD also points directly at Sports Minister Vitaly Mutko for his alleged involvement in the cover-up.

The programme comes just days before world athletics governing body IAAF is set to rule on whether to reinstate the Russian athletics federation ahead of the August 5-21 Rio Olympics.

Russia's sports ministry on Tuesday evening released a pre-emptive statement in response to the documentary, insisting it is making extensive efforts to develop a transparent and independent anti-doping strategy.

The Kremlin has also warned that it would treat unfounded allegations about doping as “absolute slander”.

But the documentary titled “The Secret World of Doping: Showdown for Russia” screened footage dated April 27 showing that the former chief trainer for the speed walking team, Viktor Chegin, was still involved in the training of national athletes, even though he had been banned for life over doping convictions.

Among athletes undergoing training were Olga Kaniskina and Sergey Kirdyapkin, both of whom had been stripped in March of their Olympic medals because of doping.

Based on documents of the former boss of the anti-doping laboratory in Moscow, Grigory Rodchenkov, the whistle-blower who has fled to the United States, ARD noted that Russia's sports ministry advisor Natalia Zhelanova was “permanently interfering (in) everyday operation of anti-doping agency Rusada”.

The TV programme also documented an email exchange between an anti-doping laboratory and the sports ministry over the positive results in August 2014 of a footballer from the club Krasnodar.

Asked if it should “wait for the decision from VL” before publishing the results, the laboratory was given the answer yes from the ministry.

According to ARD, VL signified the initials of the sports minister – Vitaly Leontyevitch Mutko.

Three Krasnodar players count among Russia's team at the European Championships in France, opening their campaign against England on Saturday.

It has also touched off investigations that led to a raft of Russian athletes being stripped of their Olympic medals.

PARTNER CONTENT
World Cup 2022: How to watch every game, wherever you are