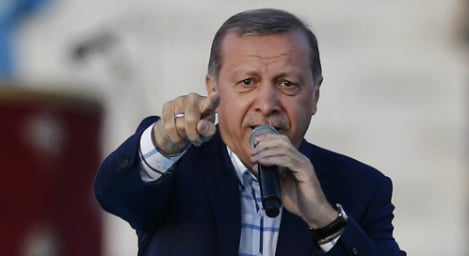 “Their blood is impure and we know whose spokespeople they are,” Erdogan told a cheering audience at a televised rally on Saturday.

“They are the long arm of the separatist terrorists in this country in Germany.”

“I've never experienced this quality [of attack]. Some manic, crazy person might hear that and think 'the leader has given his orders'.”

“Unfortunately there is also a Turkish Pegida,” Green party leader Cem Özdemir – a longtime Erodgan critic and one of the people who pushed for the Armenia resolution – told Die Welt am Sonntag.

“Far-right radicalism is not a German privilege. It exists in Turkey too and among German Turks.”

Berlin police have reportedly increased their protective detail around Özdemir's flat in the capital in response to the threats.

Erdogan showed no sign of letting up his verbal assaults on Germany on Sunday evening.

Germany was “the last country” that could remonstrate with Turkey about a “so-called” genocide, he said in remarks reported by state news agency Anadolu in Istanbul on Sunday evening.

The Federal Republic should look to its own history of the Holocaust and the extermination of more than 100,000 Herero people in Namibia in the early 20th Century instead, he said. Armenian refugees from the Ottoman Empire in Syria in 1915. Photo: Library of Congress/DPA

More than one million Armenians were killed by Ottoman forces between 1915 and 1916 in a “planned removal and expulsion,” the Bundestag resolution passed last week read.

The massacre “stands as an example for the history of mass exterminations, ethnic cleansings, expulsions and indeed genocides,” of the 20th Century, it went on.

Nor did MPs spare Germany's role as a close ally of the Ottoman Empire during the First World War.

“Despite unmistakable information from German diplomats and missionaries about the organized expulsion and extermination of the Armenians, the German Empire did not try to stop this crime against humanity,” they declared.