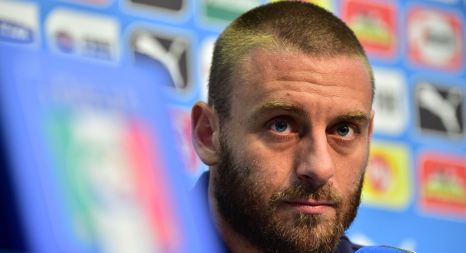 "On paper, we are capable of beating anyone," said Daniele De Rossi on the Italy team. Photo: Giuseppe Cacace/AFP

But the 32-year-old said that the Italians could “beat anyone” and despite his protestations they go into the tournament as strongly fancied to go far.

“We are not among the favourites, obviously. But we are proud to represent a glorious history,” the Roma star told a press conference ahead of their tricky June 13th opener against Belgium.

“We are a very good team, well organiZed and physically well prepared. On paper, we are capable of beating anyone.”

De Rossi sprang to the defence of Thiago Motta, whose inclusion as a ball-playing midfield schemer in the number 10 role has drawn criticism in some quarters.

“Those who mock the choice know nothing about football. He is not a number 10 like Baggio or Totti, but technically he is a maestro,” said De Rossi.

Also in a highly competitive Group E are Sweden and Republic of Ireland.